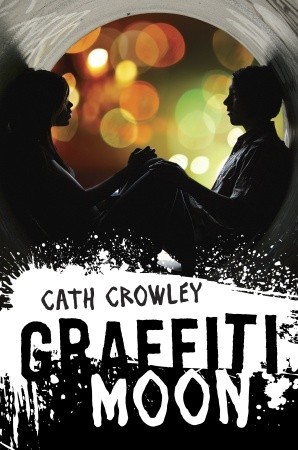 In a recent Cover Wars post, we warred over the cover of Cath Crowley’s upcoming novel (which Janet said she’d pass, no, I’m not going to stop nursing my grudge) and I mentioned how great my love is for Graffiti Moon the last YA novel Crowley wrote and the novel that made me fan of all things she writes.

I will attempt, in this one-sided discussion, to articulate the many reasons I love this book and hopefully get you interested in reading it.

First of all, you should know that I don’t usually read contemporary/realistic (the two terms are used interchangeably here at The Book Wars) YA but when I do, it is usually written by Australian authors and more often than not set in Australia. Why North American contemporary/realistic YA doesn’t work for me is usually the shallowness and lack of logic the narratives are infused.

Yes yes, I know them’s fighting words but hmm, I feel like North American contemporary YA novels for all their claims to be realistic (and I’m not talking about books that deal with social topics in particular but books simply that deal with the lives of contemporary young adults living in North America) are still romanticized.  Obviously my claims would benefit greater research but until then, you can take my word for it.

My point is, contemporary YA fiction is not my jam unless it’s written by an Australian author and then I (usually) suddenly love it.

Graffiti Moon takes place over the space of one day…night. Okay mostly night. It concerns the lives of three girls and three boys, five of whom attend the same school. The 6th one, one of the protagonists, dropped out of school for various reasons. The kids, Ed, Lucy, Leo, Jazz, Daisy, and Dylan, are out celebrating the end of senior year. Lucy has permission from her parents to spend the entire night out and she has news that Ed, Leo, and Dylan know the identity of her crush, Shadow, a graffiti artist who has covered the walls of her town with his art. So she accompanied by her bff Jazz and new friend Daisy goes to a hangout where the boys are. Daisy and Dylan are a couple currently on the outs while Jazz is determined to kiss someone that night and Lucy and Ed? Well, they have history.

She broke his nose on their first (and last) date. Ed and Lucy are very different people and yet Lucy couldn’t help saying yes when he asked her out that one time. As she says:

The guy was a sheddy, one of the kids who spent a lot of time leaning against the back sheds skipping classes. I’d seen him around before but then I never really noticed him till the start of year ten, when we were in the same art class.

It was an elective subject that year and I got the feeling he thought it;d be an easy option. Most times when I looked over he wasn’t drawing. He was leaning back in his chair and staring at me.  And every time he stared I felt like I’d touched my tongue to the tip of a battery. I was nothing but tingle. After a while the tingle turned to electricity, and when he asked me out my whole body amped to a level where technically I should have been dead. I was pretty sure we had nothing in common, but a girl doesn’t think straight when she’s that close to electrocution.

Ed takes Lucy to all the places Shadow has drawn his pieces and by doing that, he, unknowingly maybe, bares his heart to her.

The novel is more a character study than plot-driven but at the same time there is an end goal to look forward to, a question that demands an answer.

Ed is a very complex character–his dyslexia makes reading almost impossible and he is attracted to smart girls who always want to talk about the books he can’t read. His family is made up of a single mom and his best friend Leo who has his own demons to contend with. They are poor and sometimes food is optional. Ed is an artist but his dyslexia prevents him pursuing it academically. Lucy, on the other hand, has both parents though they too are interesting individuals. Her dad is living in the garage because her mom needs as much creative space as he does. Lucy is worried they have fallen out of love and divorce is waiting in the wings despite both her parents assuring her once and again that it’s really not. She, too, is an artist though she works with glass rather than paint. And she is in love with Shadow despite never having once seen him (or so she thinks). She connects to his graffiti art on a visceral level so perhaps it might be more accurate to say that she’s in love with her idea of Shadow.

Hanging out with Ed makes her remember and realize all the things about him that she likes…perhaps more than she likes the obdurate Shadow.

Her friend Jazz might like Ed’s friend Leo quite a bit. Though Ed and Lucy’s story is primary, Jazz and Leo’s story weaves in and out buoying the other narrative, lightening it or becoming a foil for it. Daisy and Dylan bring the comic relief. Observe:

I wait until they’re gone, then I ask, “You think Dylan’s telling the truth?”

Daisy checks her face in a little mirror, then hands it to Jazz. “You want me to find out?”

“Let’s not ruin the mood by calling them liars.” JAzz looks in the mirror. “I hate my freckles,” she says, and hands it to me.

“I like freckles,” Daisy says. “And I won’t ruin it. I’ve got this special way of getting the truth out of Dylan.”

“That’s pretty special,” I tell her, and back the mirror.

There is a lot of heart in this book. Ed’s relationship with his mentor who passes away, his friendship with Leo, and his love for his mother. Lucy’s relationship with her mentor, friends, and parents. The real threat of poverty and hunger, the limitations imposed upon those who don’t fit the standard society demands, and the authenticity of the emotions these adolescents express are all reasons this book is a success.

Another reason this book works so wonderfully is that the alternating perspectives used to tell the story is used in a brilliant way to contribute to the story instead of just being a technique used to narrate it. Certain events are portrayed twice, once from Ed’s perspective and again from Lucy’s. We see the relationship on two levels: one, in the words they say and their communication, and two, in the things they think but do not say. We see them being compatible simply in the way they think in similar ways and see the world in the same colours. I think it is grand.

Another thing I loved about Graffiti Moon is how unassuming it is. It doesn’t attempt to be anything or do anything other than a good book about a group of kids who are living life as truly as they can. You can almost feel the asphalt hot under your feet and smell the paint drying on the walls. Read this book.

One response to “Graffiti Moon by Cath Crowley: A FanGirl Discussion”