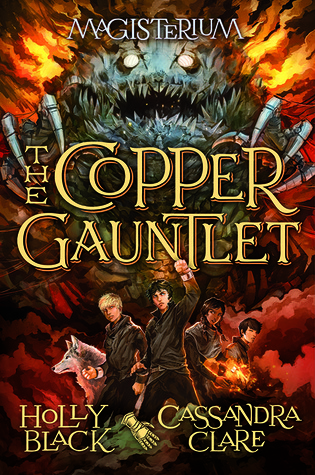 Callum Hunt’s summer break isn’t like other kids’. His closest companion is a Chaos-ridden wolf, Havoc. His father suspects him of being secretly evil. And, of course, most kids aren’t heading back to the magical world of the Magisterium in the fall. But things only intensify [at the Magisterium]. The Alkahest– a copper gauntlet capable of separating certain magicians from their magic– has been stolen. And in their search to discover the culprit, Call and his friends Aaron and Tamara awaken the attention of some very dangerous foes … and get closer to an even more dangerous truth. — [X]

… even the covers get better and better. The first book’s cover was fun because it was kind of sneaky. It focussed on Aaron the super-sweet, made-to-be-a-hero type and put Call, the actual protagonist, on the sidelines. The cover for The Copper Gauntlet is also misleading but in a different way. This time, the spotlight is on Call, paused in a heroic sort of pose while being flanked by his friends, Havoc, and Jasper. What’s interesting is that, for people who’ve read the last book, this only serves to complicate our understanding of Call’s personality and his role in the story.

You see, Call may/may not be evil incarnate. We don’t know for sure. Call doesn’t know for sure. His friends certainly don’t know a thing. But it is what fuels the plot as well as Call’s internal conflicts, ripping his small family apart, and slowly pushing his friends away. Right from the start he keeps an Evil Overlord column in his head. If he does something bad, he records a point in the Evil column. If he does something good, he puts it in his Not Evil Just Human column:

Which book would and Evil Overlord take out from the library? Was dressing in all black a definite Evil Overlord move, or a legitimate choice on laundry day? — Page 2.

It’s funny at first and you tend to appreciate the levity with which Callum is handling the news that he may, at the end of the day, be carrying around the soul of a man whose is not-so-fondly remembered as the Enemy of Death. And then you realize, Call is thirteen and most definitely isn’t dealing with anything. Thing is, despite not knowing where Call will end up on the Good-Evil spectrum (or if he’s right and there aren’t any heroes, only people with shorter and longer Evil Overlord Columns), Call is never alienating. He is still the kid you adored in book one, only a little grown up, with a few bigger problems. His character is written exceptionally well, and he continues being one of my favourites.

The Trio (And Company) 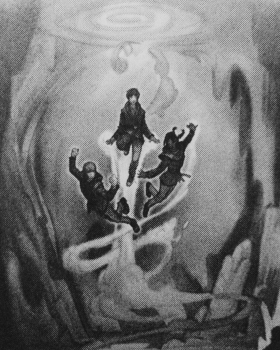 Of course, Call isn’t the only one who’s grown up over the summer. Aaron– who is the Makar, a Chosen One– is learning that there is more to heroism than attending a parties and performing tricks. It’s hard, controlling the fifth element, and harder still to use chaos to save people. Tamara, meanwhile, has her own problems. There are certain expectations people have for a mage from the Rajavi family, there are expectations that the Magisterium has of her too, but all their expectations seem to conflict with those that her friends place on her. Clare and Black bring these kids’ individual conflicts to the forefront with seeming ease, even though the story is told through Call’s limited POV. Black and Clare expertly reveal how these struggles chafe on the trio, how they affect their relationships with each other, and how they eventually drag Jasper into the fold. 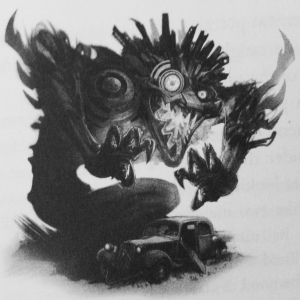 Even though they spend only about half of the novel at the Magisterium, quite a lot is revealed about the nature of magic in this world. We gain a deeper understanding of the five elements, how they affect the mages who use them, and how they can affect the world around them. I don’t want to give too much away here, but we do also get a better understanding of chaos as an element, how it shaped Call’s past, and how it might shape Aaron’s future. Master Rufus, the trio’s teacher, continues to be an absolute ray of sunshine and I hope he is secretly immortal.

I don’t know. I guess the fact that it’s not a stand-alone might put you off? You’re missing out though.

The Copper Gauntlet continues what The Iron Trial began and complicates the idea of heroism. Through Call, Call’s father, his friends, Jasper, and even Call’s pet wolf, the novel explores the idea of extraordinary Good and Evil, pitting it against the more fallible, more everyday acts of good and evil, weighing it to see what makes one human and if it’s worth– even being a larger than life hero– moving from the lower-case to the upper-case. All this, plus, great illustrations, as well as writing that can make you laugh while also making you clutch at your chest because of Feels. (Plus, IMHO, it has one of the more well-written disabled protagonists.)

2 responses to “The Copper Gauntlet by Holly Black and Cassandra Clare: A Review”