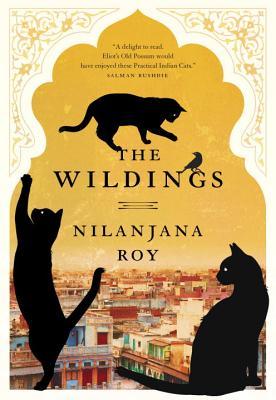 The Wildings by Nilanjana Roy just may be the one of the more interesting books I read this year. I am generally not a fan of anthropomorphized characters and it is my good fortune then that instead of presenting personified cats, Roy is careful to retain their animalness. The Wildings is an adventure into the feline mind, trying to parse through feline philosophy, laws, and logic. I have a lot to say about this novel but first, the official synopsis:

In the labyrinthine alleys and ruins of Nizamuddin, an old neighbourhood in Delhi, India, lives a small band of cats. Miao, the clan elder, a wise, grave Siamese; Katar, loved by his followers and feared by his enemies; Hulo, the great warrior tom; Beraal, the beautiful queen, swift and deadly when challenged; Southpaw, the kitten whose curiosity can always be counted on to get him into trouble… Unfettered and wild, these and the other members of the tribe fear no one, go where they will, and do as they please. Until one day, a terrified orange-coloured kitten with monsoon green eyes and remarkable powers lands in their midst–the first in a series of extraordinary events that threatens to annihilate them and everything they hold dear.
The Wildings is a gorgeous evocation of Delhi, a love paean to cats and a rich, often savage tale of survival and conquering one’s fears.

And there you have it.

Animals in the book communicate via things they call “Sendings,” which is perhaps equivalent to telepathic messages that travel one mind to others through invisible wires. The distance a cat is able to broadcast depends on their power and a “Sender” is someone who is able to send not just messages but themselves or mental representations of themselves through these invisible wires.

The trouble comes to the Nizamuddin wildings (cats) when a strange but very powerful Sender arrives in their midst. The general consensus is that this cat, whoever she is, needs to be killed and quickly. So Beraal, a Queen cat, is given the responsibility of taking out this strange and extremely powerful cat…who turns out to be a fluffy kitten.

Not that this wins her much sympathy from many of the other cats. She’s an inside-cat, as in owned by Bigfeet (humans), who keep her fed and safe which is just as well because being orphaned when she was only a few days old, she is completely helpless on her own. The kitten’s name is Mara. Imagine you are going on your way or stalking a particularly plump morsel and suddenly, out of nowhere and without warning, a voice in your head announces at maximum volume:

“That was scary!” a voice said in [Beraal’s] head. “Mara could have gone rolling and tumbling all the way down. And now my bottom hurts!”

The cute is immense but I am not a cat. Beraal finds she cannot resist the cute and wins the right to teach Mara the way of the Cat (and perhaps control over her Sendings). Mara wins…the right to keep breathing. Hah.

During one of their lessons, Mara Sends herself all the way to a zoo miles away and meets a tiger who is not at all pleased that a little kitten (!!!) dares to talk to him. He tries (unsuccessfully) to eat her (can hardly bite through a kitten who isn’t physically present) until his mate, Rani, beats him into good behaviour. Mara befriends the tiger cub and is soon spending time with him and a lemur.

The antagonists of the story are a group of cats who due to never having stepped out of their house have gone feral. Their owner is frail and dying and the Nizamuddin wildings know that the time is coming when these feral cats whose sense of good and evil has become warped will come outside.

The Wildings has many extraordinary characters. There is Hulo, Katar, Southpaw (another kitten), Miao. There is the leader of the cheels, (a kind of predator bird), Tooth (his mate is Claw). Even the leader of the feral cats, Datura, is deliciously evil. The weasel, Kirri, is mysterious and dangerous. My point is, all characters in this novel, no matter how slim their roles, are memorable if only for their names (one cat is called Qawwali).

There are some jokes that will be apparent only to those who understand Hindi and the Indian culture (for instance, there is a hen whose mate is called “Sunte ho”), the story is accessible and no cultural barriers or the like will keep you from enjoying the book.

The novel discusses a lot of things but mostly it is about retaining your self and living in harmony while being true to your self. For instance, Southpaw is taught that there is a degree of respect granted to the prey you hunt and a quick kill is a merciful kill. The wildings disdain the inside-cats and Mara is often castigated for her choice to remain inside. Datura and his band of evil cats are evil precisely because they haven’t ever gone outside and realized the size of the sky above them. Roy manages to, very poetically and poignantly, paint the vibrant lives of the cats humans wouldn’t necessarily notice on a daily basis. The way these cats (and other animals) navigate the same streets humans walk is vastly different but no less compelling. Mara’s growth does not end with this novel but from what I understand, there’s a sequel to The Wildings that will be arriving in stores next year.

So if you like cats and you like good books, read this. It may not be anything you have ever read before but I promise it will make you chuckle and leave you thinking.

The babblers fluffed up their feathers, and Beraal sighed. She was in for it now. Typically, Sa led the way.

Pa: “Been so offended”

5 responses to “Review: The Wildings (The Wildings #1) by Nilanjana Roy, Prabha Mallya (Illustrator)”