Rapunzel shook her head. “Frederic, I hope you realize you can be yourself around me. You don’t have to pretend you’re anything you’re not.” 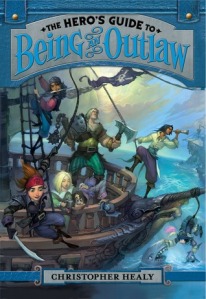 “Ah,” said Frederic, keeping his distance. “I see you are a coward.”

“I regret no words,” Frederic said. “I love words. And the words I just spoke are the truth. You are a coward, because only a coward would rather defenestrate a helpless old man than face me in a fair fight.”

“Yeah, I wasn’t gonna defenestrate him,” the wing-haired man said. “I was gonna throw him out the window.”

“Then why didn’t you just say ‘throw him out the window’?”

“Because I love words,” Frederic said with a smoldering intensity. “But my point still stands: You are afraid to duel me.” (p. 433-434)

6 responses to “Review: The Hero’s Guide to Being an Outlaw”