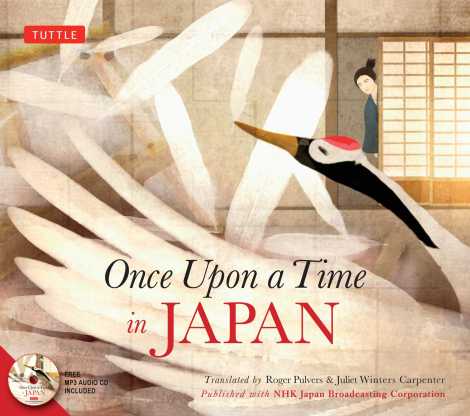 Once Upon a Time in Japan is a wonderful collection of Japanese folk and fairy tales translated from Japanese by Roger Pulvers and Juliet Winters Carpenter. The book is wonderfully constructed with good quality paper and beautiful endpages that contain mini-illustrations that are found in larger sizes interspersed within the text. The book comes with an audio CD in which all the stories are read out loud. The stories are accompanied by vivid illustrations in a variety of styles that bring the tales to life.

I found the stories to be so revealing of the simple beauty of life, especially since a number of them revolve around the acquisition or the distribution of food. There are some stories which will feel familiar to Western readers apart from one or two key elements that send it in a whole new  (and unexpected) direction. My favourite story was one where a monkey was punished for his greed and failure to keep his promises. Some of the tales are sad as in “The Gratitude of the Crane” and some others are humourous but all of them are magical. These tales give a glimpse of the enormous bounty of culture and stories of Japan.

This volume would make a wonderful gift for a child or a lover of all things Japanese. The book is as beautiful as the stories it tells and would be a wonderful addition to any collection. Once Upon a Time in Japan can also serve as introduction to other cultures and other fairy tales. Strongly recommended.

Find out more about the book here.

NHK World is the international service of Japanese public broadcaster NHK. The stories published in this book were part of a special series produced by Radio Japan, NHK World’s radio service in 18 languages.

Illustrators
After working as a graphic designer, Manami Yamada became an author of children’s books and an artist. Her books include Grandma Nosehair, whose llustrations were selected for the Bologna Illustrators Exhibition in 2008, and Kaeru to Okan (“The Frog and the Crown”). She is the recipient of several awards.

Tomonori Taniguchi was born in Osaka in 1978, and studied Nihon-ga Japanese painting at Kanazawa College of Art. His children’s books have been published in Japan, France and Italy. They include Sarukun to Banana no Yuenchi (“Monkey and Banana’s Amusement Park”) and Pinocchio, la marionnette de fer (“Pinocchio the Iron Puppet”).

Born in Gifu prefecture in 1978, Nao Takabatake is an author of children’s books and an illustrator. He received the Japan Picture Book Award in 2013 for Kaeru no Odekake (“The Frog Goes Out”). His other works include Chiita Dai Se-ru (“Cheetah’s Big Sale”) and Banana Jiken (“The Banana Incident”).

Takumi Nishio was born in Tokyo in 1968. He worked as graphic and set designer for public broadcaster NHK from 1994 to 1999, and later produced animations, illustrations and opening titles for TV programs. He currently teaches at the Yokohama College of Art and Design.

3 responses to “Review: Once Upon a Time in Japan by Japan Broadcasting Corporation (NHK)”