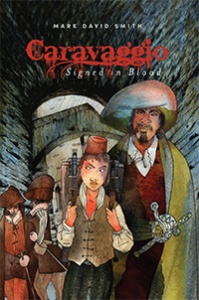 Caravaggio: Signed in Blood is the story of Beppo, a fifteen-year-old boy whose widowed stepfather sold him into indentured servitude four years ago. Beppo is less than happy with his situation.

Constantino Sparta, my bloated pig of a master and the wine seller of Piazza Navona, towered in front of me. (p. 11)

Beppo is deeply immersed in his role as an indentured servant. He hates Constantino and casually insults him (internally), yet he obeys. Beppo resents his working conditions and his crummy lot in life without expecting either to change. He works hard and, to a certain extent, absorbs his master’s questional morals: certainly Beppo has no qualms about stealing a copy of Il Ingenioso Hidalgo Don Quijote de la Mancha, compuesto por Miguel de Cervantes Saavedra when he discovers that his master has secretly been cheating the partner whose books he smuggles.* Beppo seeks to protect himself and does not expect protection either from the heavy-handed Constantino or from Constantino’s enemies. He even works for his master’s good, whether out of self-interest or pragmatism: he tries to conceal Constantino’s cheating, he pretends he doesn’t know where the coins are kept, and he tries to appease a man to whom Constantino owes money. When Constantino beats him, Beppo yells for help without, seemingly, any real expectation of it; he is aware of his situation and resigned, without being downtrodden into passivity.

In the two years that I’d been with him, all I’d learned was how to sneak and to flatter. Other boys my age were well into their apprenticeships. Me? If I stayed with this master, I’d end up either a crook and a fraud like him or a beggar on the streets. (p. 12)

And thus the adventure is set up. Because of course Beppo does not stay with Constantino: that would be quite impossible, for Beppo witnesses his master’s death and is presumed to be the murderer. On the run in the bustling city of Roma, Beppo saves the life of the tempestuous painter Caravaggio, whom Beppo had met earlier –

It was the man who lived at the home of Cardinal del Monte. His surly voice with its northern accent threw a chill up my spine. I rushed to the front of the shop. The visitor was dressed all in black, silhouetted against the sunlight like a threat. I invited him inside. (p. 17)

– and who also finds himself on the run for murder. Cast into exile with a foul-tempered genius for a new master, Beppo is fortunate to be quick-witted and a quick study.

The novel is rich in vivid descriptions of the liveliness of the cities Beppo inhabits and in lucid tactile detail which gives a strong sense of the reality of Beppo’s work, whether that work is scraping out old barrels or preparing canvas for paint. Side comments by Beppo and Caravaggio also give a sense of the class hierarchy which they are bound by even as they benefit from the interest of powerful men and, occasionally, women.

As befits the hero of a tale which includes duels to the death, murder, knights, and pirates (also, true love),*** Beppo doesn’t spend a lot of time dwelling on his feelings, particularly in the second half of the story. Instead, his internal landscape is largely revealed through his actions and in the physical details of the hardships he undergoes.

And undergo hardships he does. Beppo is enjoyable non-heroic****: made to ride in the trunk of a carriage as he and Caravaggio flee, Beppo is thoroughly sick:

We lurched along rural roads without stopping. Although I tried hard to control my bladder, the sudden jolts made this impossible. Finally I gave up altogether – to my shame and great relief. As if being cramped, stiff, sodden and smelling of urine weren’t bad enough, the sharp turns and sudden dips in the road gave me a growing feeling of nausea, reminding me of my first storm at sea. To be seasick on land, though – surely that was a first! In time, I lost control of my stomach and began retching violently.

I appreciated the attention to detail and the perilous nature of travel, including lousy roads, seedy inns, and lurking bandits, all the more because the action (swordfights, a courtesan whom Caravaggio paints as the Madonna, and pirates, remember?) and concrete details made the scenes easy to visualize: this could easily become an action movie, except that, unlike action movie characters, Beppo suffers discomfort. The realities of life – wonder as well as discomfort – are not glossed over: Beppo experiences it all.

Including true love. Did I mention true love? Oh, yes. Beppo meets Dolcetta, the aforementioned courtesan’s daughter, and very shortly after falls head over heels when she kisses him. Apparently the attraction was mutual. Dolcetta begins as an assured young teenager, definitely bolder than Beppo at expressing her feelings; unfortunately, by the end of the book she is comparatively meek. Her rescue (from a loathsome marriage) is the crowning achievement of Beppo’s adventures and their marriage culminates the story. I would have liked a little more development of her character; however, the story is very much Beppo’s adventure as he leaves impoverished servitude behind and earns knighthood and wealth – and marriage with Dolcetta is clearly the pinnacle of his dreams. He is rather sweet that way.

Certain aspects of the pirate episode gave me pause. Beppo is incidentally rescued by a “dark-skinned” slave boy who kills the man who had, a paragraph or so previously, claimed to have “broken” him; while this form of revenge is much more fitting than Beppo killing the pirate and liberating the slaves by himself, it felt a bit suspect: it feels slightly as though Malak (the former slave) got his revenge so that Beppo could keep his hands clean. I would have liked more of this character, and of the other ex-slaves.***** Their abandonment of the boat at the sight of the Knights’ ship, for fear of being sold at Malta’s slave markets shows a nasty underside to Beppo’s world that isn’t explored, except for the reward their choice unknowingly confers upon Beppo as the sole occupant of a ship full of treasure. (Well, the sole living occupant.) The pirate episode is a fairly short one; the opportunity to expand on Beppo’s brush with a world utterly different than the cities he has known was not taken. My other complain is that the confrontation in the second-last chapter almost bordered on melodrama. On the other hand, how could that be avoided, given a pre-wedding party scene involving parted lovers, a villain, old men in charge, a mama determined to protect her daughter, a duel, and a confession? The scene was amusing, at any rate.

Concluding words (except for the footnotes): if you’re looking for a rollicking adventures for a nine- to fifteen-year-old who likes swordfights, Italy, history, art, and/or pirates, give this a try. I hesitate to say “clean,” because that word has inexplicably come to be associated with bland, didactic novels, but this is an entertaining read with an underdog hero who ultimately  triumphs over dastardly villains to win a place in the world and a happy ending. 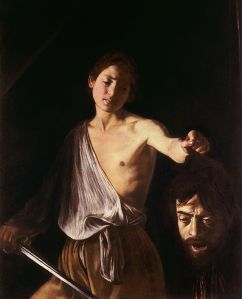 (Caravaggio’s David with the Head of Goliath; in the novel, Beppo is the model for David. The head, in both the novel and in real life, is that of the painter himself.)

* If you steal from someone who steals from his partner in theft, whom are you really robbing?

** The enemy of my enemy is not always my friend, evidently.

*** Oh wow. Anyone else hear this in the voice of the old man from The Princess Bride? Which, ahem, also deals with duels to the death (sort of), murder (attempted – is it murder if the victim is not all the way dead?), knights (minions of the evil prince), pirates, and true love. If you like one, perhaps you’ll like the other

**** At least at first. He begins very nearly the antithesis of a stalwart hero, and ends his adventures as nearly the embodiment of heroic masculinity. Does this make the story a swashbucking Cinderella tale?

***** A sequel with Malak as the protagonist? That would be awesome.