Mama’s away one night, and her son can’t sleep. He tries to relax by counting stars, but the more of them he sees, the more determined he is to count every single one. Then the boy finds that Daddy can’t sleep either. Together, the two of them set off on an unforgettable all-night journey of discovery.

When it comes to picture books, dads tend to get the short end of the stick. Picture books about “mommy and me” abound, but picture books depicting caring, responsible fathers  can be difficult to find. For many children this exclusion of father-figures does not reflect their everyday realities, and the lack of father characters in picture books only serves to reinforce persistent stereotypes of fathers as absentee or secondary parents, less important to children than their mothers.

How Many Stars in the Sky? is such a beautiful book because it showcases a positive, loving relationship between a father and his young son who are brought together by the starry night sky. 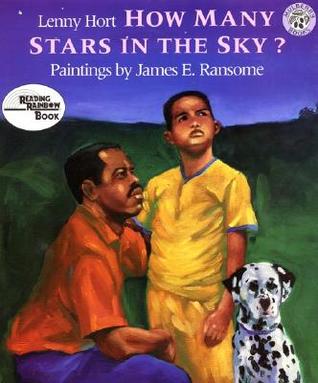 This story really is lovely on so many levels. Though not explicitly mentioned, the illustrations suggest that Mama is away on a business trip, which is a reversal of traditional parent/gender roles. The father isn’t depicted as being totally inept in the absence of the mother either, which happens frustratingly often in picture books. He isn’t distant or emotionally-unavailable, either. Also, this is a successful, loving, two-parent suburban African-American family, a reality that’s commonly overlooked by popular media.

The stars really are incidental here, serving mainly as a device to bring the father and son closer together, allowing them to bond in a new and wonderful way. Oh, and as an excuse for me to slip this beautiful picture book into this month’s Space theme…

And yes, this is a Reading Rainbow book. If you don’t have “butterfly in the skyyyyy, I can go twice as hiiiiigh” playing in your head right now, then you and I had very different childhoods (thankfully Youtube can help fill you in on what you’ve missed, but don’t take my word for it).

Also – this was written by Lenny Hort! Lenny Hort, for those of you who don’t storytime on the regular (yeah, it’s a verb now), wrote one of my all-time favourite singable picture books, The Seals on the Bus. James E. Ransome is no slouch either, be sure to check out his website for more examples of his stunning paintings and illustrations.