Blast off into space and get to know Mae Jemison—the first African-American woman to ever go to space—with this fascinating, nonfiction Level 3 Ready-to-Read early reader, part of a new series of biographies about people “you should meet.”

Meet Mae Jemison, the first African-American female astronaut! Did you know before Mae was an astronaut, she went to medical school and joined the Peace Corps? But she never forgot her childhood dream to travel to outer space. So in 1985 she applied to NASA’s astronaut training program. On September 12, 1992, Mae flew into space with six other astronauts aboard the space shuttle Endeavour and made history—just like you can if you follow your dreams!

A special section at the back of the book includes extras on subjects like history and math, plus a fun timeline filled with interesting trivia facts about space! With the You Should Meet series, learning about historical figures has never been so much fun! – You Should Meet Mae Jemison

When Soviet cosmonaut Valentina Tereshkova became the first woman in space in 1963, the career options for most young women were severely limited – most would become teachers, secretaries, nurses or homemakers, with few other options. It would be twenty years before an American woman would follow Tereshkova into space.

Fast forward several decades, and young women can now aspire to be just about anything, including scientists and astronauts. The path to space isn’t easy, but thanks to pioneering women like Dr. Mae Jemison, what was once an unobtainable dream is now a possibility. Mae Jemison was the first African-American female astronaut, which is in itself a major accomplishment, but she’s also a physician, a former Peace Corps volunteer and a successful entrepreneur.

Dr. Jemison always knew that she would be an astronaut one day, and while her parents were supportive of her ambitions and her scientific curiosity, the opinions of her teachers seemed firmly entrenched in the past.

“In kindergarten, my teacher asked me what I wanted to be when I grew up, and I told her a scientist,” Jemison says. “She said, ‘Don’t you mean a nurse?’ Now, there’s nothing wrong with being a nurse, but that’s not what I wanted to be.” In an interview with MAKERS.com, she further explains how her sheer interest in science was not accepted. “Growing up…I was just like every other kid. I loved space, stars and dinosaurs. I always knew I wanted to explore. At the time of the Apollo airing, everybody was thrilled about space, but I remember being irritated that there were no women astronauts. People tried to explain that to me, and I did not buy it.” Wikipedia

As if being a doctor and an astronaut isn’t enough, Dr. Jemison holds nine honorary doctorates in science, engineering, letters, and the humanities. And…ummm…just to let my nerd flag fly a little bit here…Jemison also appeared on an episode of Star Trek: The Next Generation, making her pretty much the coolest astronaut of all time. 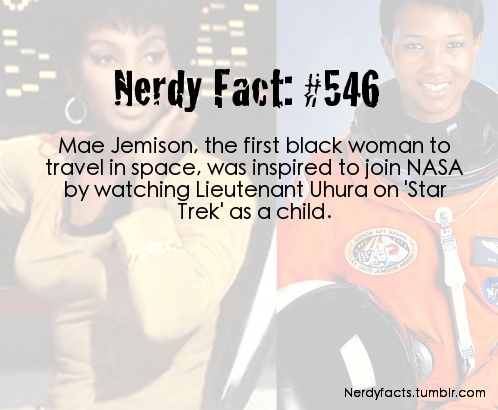 Dr. Jemison’s story is one of success, but also one of perseverance, adversity and struggle. She succeeded in achieving in her dreams in spite of society, not because of it. She fought against racism and sexism to achieve success in a male, white-dominated industry, one that remains heavily white and male-dominated to this day. Achieving your childhood dreams is possible, but not without a lot of blood, sweat and tears.

Simon & Shuster’s “You Should Meet” nonfiction biography series for kids, which includes this title, is absolutely fantastic.  The series features “inspiring people who have achieved amazing success in their field–people “you should meet”,  with future entries including ballerina Misty Copeland, athlete Jessie Owens, and “Women Who Launched the Computer Age”. Really fantastic stuff.