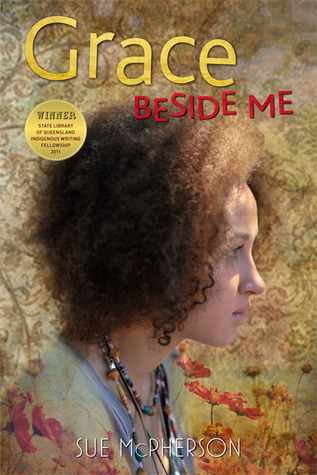 Life is not ordinary for Fuzzy Mac, but it should be. What could possibly be exciting about growing up with her Nan and Pop in a small country town?

Rivalry, romance, Nan’s mysterious premonitions, an encounter with a particularly unusual kind of ghost and the mix of characters who live in this high-country town make Fuzzy’s life far from boring. — [X]

Grace Beside Me by Sue McPherson is one of the more unusual novels I’ve read, mainly because of its narrative structure. I’ve read books that employ a kind of orality in their narrative styles before, but nothing like this. I don’t know how much it reflects an indigenous tradition of storytelling, or if it’s just a form that the author prefers, but given that both the author and the protagonist are indigenous, I would assume the former. (This is, by the way, the closest thing* to a contemporary indigenous Australian #OwnVoices YA book I could find. Any other recommendations will be appreciated.) The thing about the structure–which I loved and enjoyed thoroughly–is that, for at least the first quarter of the book, you are learning to leave behind your understanding of dramatic structure behind and embrace the story in front of you. Grace Beside Me challenges existing “acceptable” story structures and for that reason it is one of my favourite reads this year.

However, that is not the only thing that recommends Grace Beside Me. Fuzzy Mac has an incredible voice, funny and profound, confident and unsure, all wrapped up in one very special narrator. Reading Fuzzy’s story is like that very interesting period in a friendship where you’re still getting to know your friend, but with each coffee date and/or Netflix night, you decide that yes, you want this person in your life. They are a force for good. They are smart and funny and open your mind to things you’ve never considered before. That is what reading McPherson’s novel feels like. Every chapter is a meditation on Fuzzy’s school life, on her understanding of her Nan and Pop’s personalities and backgrounds, Fuzzy’s understanding of her parents, random bits about her neighbours–as the summary says, it should be exceedingly mundane, but Fuzzy’s voice ensures that every page sparkles.

What I also loved is how the format and voice includes the readers in the story. It feels like a conversation. It is also a conversation that is important because the alternative is silence:

“Stories link us to our mob, doesn’t matter if you are Koorie, Irish, Kiwi, Welsh or Indian.”

You’d think the mentions of the history of indigenous peoples of Australia and the slang and the current politics of Australia may serve to distance some readers, but the details actually serve to solidify the bonds between Fuzzy and her readers. Plus, it’s almost always followed with an explanation. For instance, when Nan explains that she and Fuzzy are part of the budgie family and that’s why she watches for birds on hot days to decide whether or not she can indulge in the rare drink:

“If the bird’s buggered, I’m buggered and I need a shandy, end of story.”

Another example, this one mentioning the difference between the knowledge that Fuzzy’s generation has and the references her grandparents make, is this gem of a line:

“Fuzzy, grab me a Bex. I’ve got a headache that could take out Muhammad Ali and Lionel Rose.”

One name is seared in everyone’s memory, while the other is not commonly known. Both, however, are brilliant boxers and Lionel Rose is given the recognition he deserves by Nan and Pop.

There are also things that Fuzzy shares that, I feel, are interesting and funny no matter who you are. For instance, when Nan compares sex for the first time to doing the washing and how, once you get the hang of it, washing is never on your mind again.

While the novel was largely wonderful, there are three things I didn’t think were handled well. Or, maybe they weren’t supposed to be handled well, since Fuzzy–as a straight and able-bodied teenager–is probably not written to be perfect. I do feel, however, that giving voice to a gay or lesbian character, would have served to counter this line: “Nothing against Ellen [DeGeneres], I just prefer the full package, if you know what I mean”. There was also a chapter called “Special Girl Esther” that, I feel, didn’t handle disability particularly well.

The final thing is that, partly because of the narrative style, trauma (and dealing with it) isn’t given enough page-time. It feels rushed–even though I understand that it isn’t meant to be–which, in turn, makes it feel like a quick fix. That said, the parts that do deal with trauma and depression are poignant and powerful:

Grace Beside Me, though a seemingly easy novel to get into, is not a novel that leaves you the same once you’ve finished. It’s a bit of a journey, reading this one. It isn’t perfect, but it’s a good one and worth exploring.

*Fuzzy is mentioned to be Koorie, while the author herself was “born to an aboriginal mother, from Wiradjuri country” and adopted by the McPherson family as a child. The internet is being frustrating on the topic of whether these are very different peoples or not–I think they are both groups that are native to the NSW region? If anyone has any good links or informations, let me know! Until then, since each nation and peoples are different, I don’t know if Grace Beside Me is exactly #OwnVoices.