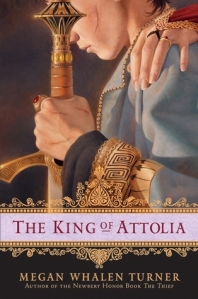 By scheming and theft, the Thief of Eddis has become King of Attolia. Eugenides wanted the queen, not the crown, but he finds himself trapped in a web of his own making.

The he drags a naive young guard into the centre of the political maelstrom. Poor Costis knows he is the victim of the king’s caprice, but his contempt for Eugenides slowly turns to grudging respect. Though struggling against his face, the newly crowned king is much more than he appears. Soon the corrupt Attolian court will learn that its subtle and dangerous intrigue is no match for Eugenides.

So the back kind of tells too much, but then, if you’ve read the series in order (instead of starting with the third book because the library didn’t have the first two, as I did), there isn’t anything terribly surprising in what is revealed.

Remember to warn of anything spoiler-y, etc.

Or, more realistically, read it all in one week and then read it all again in time for the last week’s discussions :)