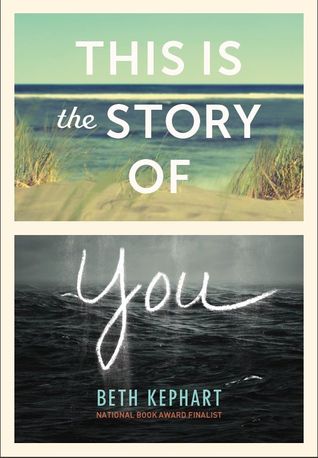 Like the colour the sun makes the sea. Like the beach bucket he wore as a hat, king of the tidal parade. Like the word I and the hour of nobody awake but me. I thought blue was mine and that we were each ourselves, and that some things could not be stolen. I thought the waves would rise up, toss down, rinse clean, and that I would still be standing here, solid.

I was wrong about everything.

Beth Kephart’s latest offering is a realistic tale about a girl who lives on a small strip of an island (if I am not mistaken, it is about 20 miles long and 5 or 6 miles wide) and the chaos that ensues when a superstorm descends upon the island without warning.

Mira Banul, the protagonist, is proud to be a Year-Rounder as she and her friends refer to each other as compared to the tourists who come to their island for the summer season and are gone when the winds change. Only one bridge connects the island to the mainland. Mira’s brother , Jasper Lee, has a lysomal disease called Hunter syndrome and Mira and her mother’s lives revolve around him. Mira’s mother leaves with her brother for the hospital where he receives his weekly dose of medicine without knowing that she will not be able to go back. Mira goes to school like normal, noticing the new guy one of her friends seems to be madly in love with and the guy her other friend is convinced means harm to that friend. Normal things.

When night falls, Mira miraculously finds a kitten who accompanies her through the storm and its aftermath.

I loved Kephart’s Small Damages and keep reading her books hoping for a repeat of the same magic. I’m afraid I have yet to love any of the books she has written since Small Damages with the same intensity. In the case of This is the Story of You the biggest obstacle to my enjoyment of the tale was the writing style.

Look, I love Kephart for her lyrical style but as someone who has lived through hurricanes I know for a fact that in the face of such fury, poetry fails. Simple short sentences which would not have distracted the reader from the fury of the storm and Mira’s fear. A sparse style would have done more to convey the events that occur during and after the storm.

The storm aside, I was not convinced by the other drama happening with the stranger barging into Mira’s house and taking over her space. The book is short and there is a lack of character development especially in the side characters. One of Mira’s friends seems paranoid and though we are told the reasons she acts in the manner she does, there is a disconnect between the reader and the character. The other friend seems flighty and shallow and while the friendship between the girls is supposed to be heartwarming, I was, once again, left musing.

I feel like there were entirely too many narrative threads and none of them were explored fully. Jasper Lee being sick, Mira’s unrequited crush, Old Carmen, the conflict between Mira’s two best friends, and the trespassers are all supposed to come together in the end to give some sort of closure to the story but I finished the book still feeling a bit baffled.

I wish Kephart had focused on Jasper Lee and the super storm out of all the things happening in the book. Jasper Lee is a wonderful character and I would have loved to spend more time with him. Kephart’s portrayal of Jasper Lee with his vulnerabilities and foibles is important, in my opinion, to distinguish a person from their disease.

If you are looking for a gritty sort of book that describes the storm and its aftermath, This is the Story of You is not going to be for you. The novel is half a lament and half a song about survival. I, unfortunately, did not love it as I had expected to but maybe you’ll fare better with it than I did.