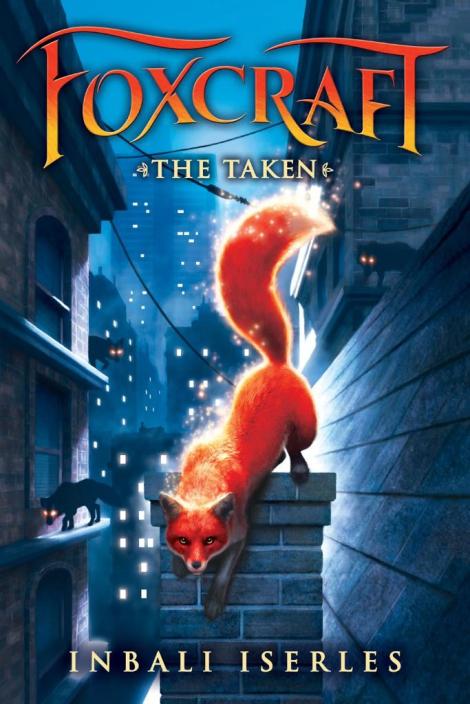 Isla and her brother are two young foxes living just outside the lands of the furless — humans. The life of a fox is filled with dangers, but Isla has begun to learn mysterious skills meant to help her survive.

Then the unthinkable happens. Returning to her den, Isla finds it set ablaze and surrounded by strange foxes, and her family is nowhere in sight. Forced to flee, she escapes into the cold, gray world of the furless.

Now Isla must navigate this bewildering and deadly terrain, all while being hunted by a ruthless enemy. In order to survive, she will need to master the ancient arts of her kind — magical gifts of cunning known only to foxes. She must unravel the secrets of foxcraft.

Janet: Much as I love foxes – which is a lot – and much as I admire the colour scheme of this cover, the synopsis doesn’t sound terribly unique. There is nothing in particular about Isla or her family that sets them apart from all the other MG animal-adventure (with or without magic) stories that I have similarly passed by. Also, “furless” is pretty obviously humans; does it have to be spelled out?

Nafiza: I like the cover too and as Janet says, the colour scheme is on point. However, I’m afraid that the synopsis doesn’t do much for me either. This is mostly because I don’t like reading books that have animals as main characters. Or well, most of the times. I did read The Wildings and enjoy it so I might be getting over my hesitation. I’m sure the intended audience, particularly those harbouring a great love for foxes, will enjoy this. 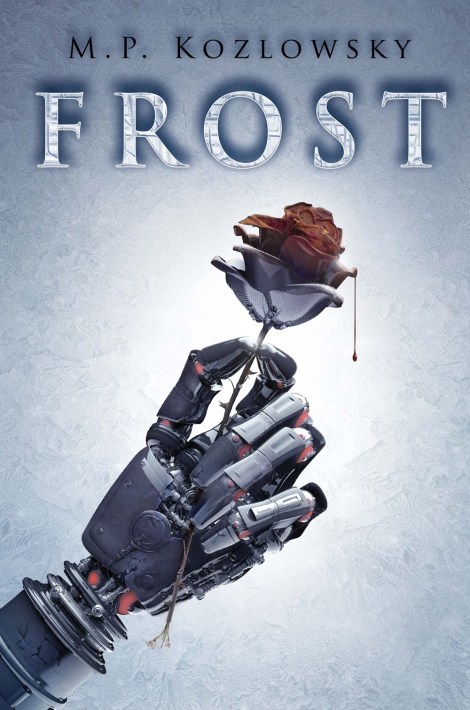 Cinder meets The Walking Dead in a chilling futuristic fairy tale that will reboot everything you thought about family, love, and what it means to be human.

Sixteen-year-old Frost understands why she’s spent her entire life in an abandoned apartment building. The ruined streets below are hunting grounds for rogue robots and Eaters.

She understands why she’s never met a human besides her father. She even understands why he forbids her to look for medicine for her dying pet. But the thing is, it’s not her real father giving the orders . . .

Before he died, Frost’s father uploaded his consciousness into their robot servant. But the technology malfunctioned, and now her father fades in and out. So when Frost learns that there might be medicine on the other side of the ravaged city, she embarks on a dangerous journey to save the only living creature she loves.

With only a robot as a companion, Frost must face terrors of all sorts, from outrunning the vicious Eaters . . . to talking to the first boy she’s ever set eyes on. But can a girl who’s only seen the world through books and dusty windows survive on her own?

Janet: I might be mildly interested if it weren’t for that overblown movie-trailer-style first paragraph. You’ll reboot me, eh? I’m not a computer.

Nafiza: The cover leaves me cold. I’ve had all the cyborg I can take with Cinder but the synopsis is actually intriguing. I might be up for giving this a whirl depending on my mood when I get my hands on this. 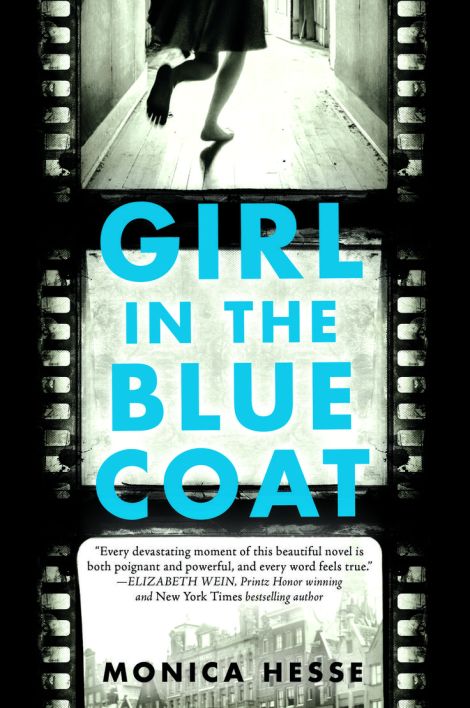 The missing girl is Jewish. I need you to find her before the Nazis do.

Amsterdam, 1943. Hanneke spends her days procuring and delivering sought-after black market goods to paying customers, her nights hiding the true nature of her work from her concerned parents, and every waking moment mourning her boyfriend, who was killed on the Dutch front lines when the Germans invaded. She likes to think of her illegal work as a small act of rebellion.

On a routine delivery, a client asks Hanneke for help. Expecting to hear that Mrs. Janssen wants meat or kerosene, Hanneke is shocked by the older woman’s frantic plea to find a person–a Jewish teenager Mrs. Janssen had been hiding, who has vanished without a trace from a secret room. Hanneke initially wants nothing to do with such dangerous work, but is ultimately drawn into a web of mysteries and stunning revelations that lead her into the heart of the resistance, open her eyes to the horrors of the Nazi war machine, and compel her to take desperate action.

Meticulously researched, intricately plotted, and beautifully written, Girl in the Blue Coat is an extraordinary, gripping novel from a bright new voice in historical fiction.

Janet: The eerie photographic effect of the top of this cover had me convinced at first that this was a ghost story. Then I saw that Elizabeth Wein praised the story – Elizabeth Wein! Anything hesitations were rendered irrelevant. And then that gripping synopsis. Oh, wow. I’m sold.

Nafiza: Oh wow, I thought the book was about monsters too. What’s up with the foot? But still, the synopsis is so compelling. If Janet gives a thumbs up, I’ll give this a try. 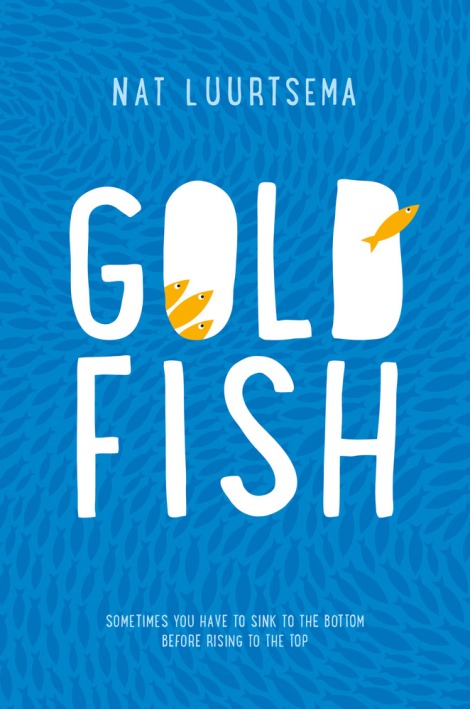 Lou Brown is one of the fastest swimmers in the county. She’s not boasting, she really is. So things are looking pretty rosy the day of the Olympic time-trials. With her best mate Hannah by her side, Lou lines up by the edge of the pool, snaps her goggles on and bends into her dive…

Everything rests on this race. It’s Lou’s thing.

… or it was. She comes dead last and to top it all off Hannah sails through leaving a totally broken Lou behind.

Starting again is never easy, particularly when you’re the odd-one out in a family of insanely beautiful people and a school full of social groups way too intimidating to join. Where do you go from here? Finding a new thing turns out to be the biggest challenge Lou’s ever faced and opens up a whole new world of underwater somersaults, crazy talent shows, bitchy girls and a great big load of awkward boy chat.

Lou Brown guides us through the utter humiliation of failure with honesty, sass and a keen sense of the ridiculous. This girl will not be beaten.

Janet: The cover doesn’t stand out, although (you guessed it) I like the blue fish background especially in contrast with the gold fish clustered by the title. The synopsis has me a little puzzled, and put off by the “bitchy girls” (really?). Not for me.

Nafiza: The cover is so cute and I was ready for this to be one of those MG books that have me cheering madly. Then I got to “bitchy girls” and yep, not for me. I don’t want to read yet another novel pitching girls against each other and fixing labels on females and just, can we not? 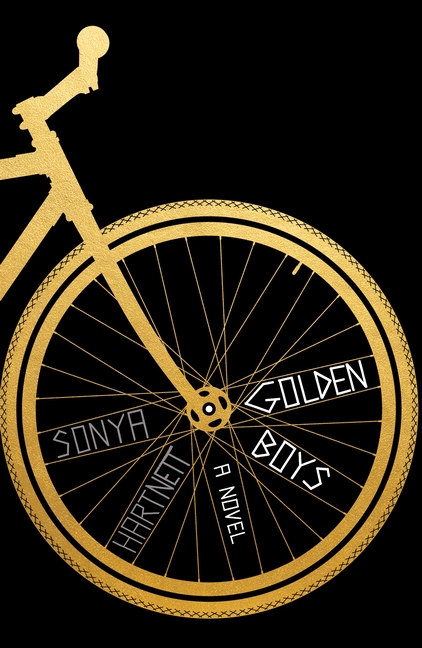 Colt Jenson and his younger brother Bastian live in a world of shiny, new things – skateboards, slot cars, train sets and even the latest BMX. Their affluent father, Rex, has made sure that they’ll be the envy of the new, working-class suburb they’ve moved to.

But underneath the surface of the perfect family, is there something unsettling about the Jensons? To the local kids, Rex becomes a kind of hero, but Colt senses there’s something in his father that could destroy their fragile new lives.

Janet: I like the texture of the gold bike! Nice to have the silhouette of a thing rather than a person. The synopsis, however – if someone needs to incite envy, there is obviously something very wrong. And new lives? something dangerous apparently not sensed before? So where’s the mother? (Dead?) What is really going on? I have a whole whack of questions and no solid reason to invest in these characters yet. The cover is pretty, though.

Nafiza: Sonya Hartnett writes like a dream. I remember The Ghost’s Child that I read and presented on in Judi’s class and well, that damn near broke my heart. She has this way of taking the most mundane things and casting them in beautifully surreal shades. I’m going to give this a whirl if I can get it in my hands. 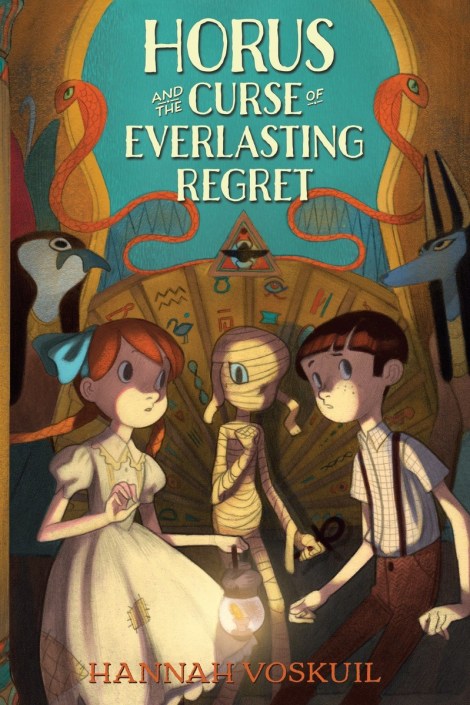 A mystery-adventure in which a boy, a girl, a pet bat, and a mummy embark on a mission to find a kidnapped girl—and reverse an ancient Egyptian curse.

Peter will do just about anything to escape being bullied by his new older brothers. He’s desperate to get to summer camp, where he can learn to build cool things like his robot, Wind-Up.

Across town, Tunie and her pet bat, Perch, are working hard at the bakery and the local museum to support Tunie’s ailing father and keep a roof over their heads.

When a business tycoon’s daughter is kidnapped, Peter and Tunie both decide they could do with some reward money; and after a chance meeting in the Ancient Egyptian Exhibit at the museum, they team up to solve the mystery together.

Things take a turn for the magical when they encounter a mummy called Horus at the exhibit, who just happened to witness the kidnapping. Together, this unusual trio will find themselves teaming up to rescue the girl and undo a centuries-old curse that just may be the key to it all.

Filled with enchantment, history, and a little bit of luck, Horus and the Curse of Everlasting Regret is a charming adventure and a story of true friendship.

Janet: The cover looks it could come from an animated film. Kinda cute. And I like that title – “everlasting regret” is an impressive curse. However. Egyptian mummies and curses have been done before (WHY.* With all of Egyptian history, which is intricate and fascinating, why does everyone fixate on mummies and curses?) and cute as the story looks, describing it as “a charming adventure” comes across as (supposed) reassurance to the adult overseer and patronizing to the child reader. (IMHbutnotatalltactfulO.)

* This is not a question so much as a demand for answers. Thus the period (and all caps) rather than the grammatically correct question mark.

Nafiza: I like the cover and I don’t know, I kinda like mummies but haven’t read much about them. So I think I’ll read this. Someday. It’s cute!

One response to “The Cover Wars”