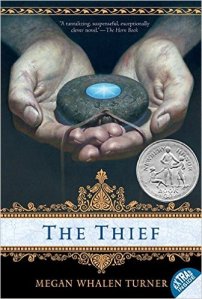 “I can steal anything.”

After Gen’s bragging lands him in the king’s prison, the chances of escape look slim. Then the king’s scholar, the magus, needs the thief’s skill for a seemingly impossible task – to steal a hidden treasure from another land.

To the magus, Gen is just a tool. But Gen is a trickster and a survivor with a plan of his own.

A reminder that there may be spoilers in the discussion below, but that they will be clearly indicated beforehand (*hint hint*). Thanks!