Hello! Welcome to our new feature World of Word Craft, our resource for writers and aspiring writers! This week, the spotlight shines on Daniel José Older! 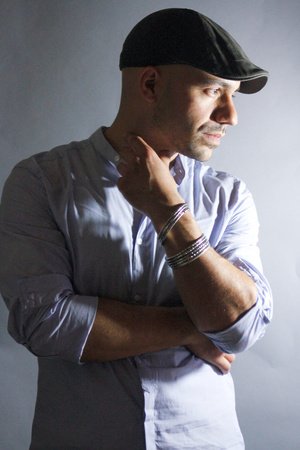 Daniel José Older is the author of the Bone Street Rumba adult urban fantasy series and the short-story collection Salsa Nocturna. His nonfiction writing on race, power, and publishing has appeared on Salon and BuzzFeed, and his short stories have been published in many science-fiction and fantasy magazines and anthologies. He also writes music and plays bass in the soul-jazz band Ghost Star.

Daniel lives in the Bedford-Stuyvesant neighborhood of Brooklyn, New York, where Shadowshaper is set. You can find his thoughts on writing, read dispatches from his decade-long career as a New York City paramedic, and hear his music at www.ghoststar.net and @djolder. — [X]

Your opening scenes, whether it is Sierra being asked what she’s looking at, or Carlos examining a crumpled body, are the perfect mix of expository and irresistible—one can only assume it is an act of precision. Do you find the first, empty page daunting? How do you overcome that fear and write such great beginnings?

Thank you! Openings are super challenging. The Shadowshaper one in particular went through many, many different drafts before it landed there. I kept starting a few days after the interesting things were happening around the neighborhood and then having her reflecting back on it–never a good idea to jump into something as static as a recollection–so it was really a matter of jumping into where shit really starts popping off, even if it’s a quiet kind of popping off. When I start a book, it’s usually after a period of reflection that culminates–the story will be kind of erupting out of me and I have to get it down, so I try to jump in with a certain amount of momentum behind me and push through that initial challenging entry point.

Also, I try to remind myself that writing is not a performance art–shitty first drafts and all that–and what matters is beginning so that you can then go back and fix up what needs to be fixed up. There are times when that blank page can be daunting, for sure, although writing with Scrivener means that happens with every new scene and you kind of get the hang of it. I find that generally if a blank page is really overwhelming to the point that I’m not writing, it’s because I haven’t done the ground work to be ready to sit down at the computer and write–there’s some piece missing. So I walk away. It’s so crucial to know when to walk away if the scene or story isn’t where it needs to be to be written. That’s not to say I have it all figured out when I sit down–I never do, but there’s usually a few key elements that need to be in place, and then I’ll figure out the rest as I go.

Most writers find themselves struggling when they hit the mid-point of their story. Do you find there is ever a point when your story seems to lose direction? What do you do when this happens?

Middles are probably the hardest part, because even if you have direction clear, things can sag and just feel drawn out. And, more than anything, this is when it’s hardest to step back and know whether or not shit is making sense or dragging, because by the middle you’re so deep in the narrative, perspective seems elusive. And you just gotta push through.

As to direction, I tend to write with only a vague sense of what the end will be, so what actually does help me push through the middle section is that this is when the ending begins to clarify itself in my mind; here’s where concrete decisions need to be made about what’s what and what will come to be. So it’s exciting in a way, figuring that out and then plunging toward it. The image I try to maintain of the middle is a bow, pulled taut, ready to fire that arrow straight into the climax. Tension is everything. Then at a certain moment, gravity will take over.

You mainly write urban fantasy, so while there is a great deal of detail drawn from your surroundings, but there is also a shadow world you have to build and incorporate—seamlessly, I might add—into the real world. How do you balance these two worlds out? When world-building, how do you decide how much detail is enough?

A lot of that has to do with having the world–both worlds, really–very alive in your mind, so when you release characters into it it’s just like, Oh yeah, they pass a bodega over here, a ghost stands outside a nail salon here … Not to say I have a meticulously detailed map in my head; it’s more like, what elements are prominent, which ones need to be stated explicitly to give a sense of the place? I’m not really into writing description, it’s just not that comfortable or fun for me and I find my eyes skimming sometimes when authors go on and on about things (some authors, not all …) so it becomes a question of how to say the most with the least and lay it out as clearly as possible. Walking around, I ask myself: What elements of this block make it what it is? What jumps out at me? What infers a deeper story at play, a complex history? The city is laden with meaning, with mythology. If I can nod at this larger history at play with a quick description, I’ve done my job.

At which point in your writing process do you start giving attention to the overall structure of your novel? Is the structure something that you begin with before you start writing, or do you let your characters guide you where they want to go?

It tends to sort of happen organically as I go. Scrivener has been really useful in that, because the whole outline is laid out right there beside the page and it’s really easy to get a bird’s-eye-view on. I feel like each novel has its own internal rhythm and thrust, not to get too er … graphic about it, but it wants to move in a certain direction and you gotta find that out as you–or I do, I should say, because some writers are great at knowing ahead of time and plotting it all out. That’s not me. Having said that, you also have to guide it, keep it in line, so to speak, otherwise it can just roll off the rails and lose all focus. So it becomes a kind of dialogue between the writer and the story, and that’s where craft comes in–finding that balance.

Carlos and Sierra both undergo quite difficult changes in their lives and they do have intense character arcs, but in the end, they never lose their Sierra-ness or Carlos-ness, if that makes sense. There are aspects to their personalities that make them feel as unique as a person of flesh and blood. When you wrote them, did they come to you fully formed? Or did you find them developing over drafts?

Yeah, they tend to show up very fully formed and then external details might emerge along the way that have to do with larger narrative more so than the character’s inner self. So, in early drafts of Shadowshaper, before it was called Shadowshaper in fact, the story was about a whole bunch of different monster groups that inhabited a kind of invisible city amidst Brooklyn–it was cool, but it was a LOT to fit into a novel, particularly a first novel. I was doing too much. So in the course of edits and some very good advice, I narrowed it down to one group which was called the Painted Dead–the memorial murals that would come to life and fight bad guys and stuff–that became the heart of the novel, the mythology. And that’s when Sierra became a painter, in order to have something active to do that would put her in intimate engagement with the underlying mythology (also a piece of myself I gave to her–I was always that kid with a sketchpad and a pen everywhere I went). And that’s key to who she is, right–but it’s external. Her personality was always curious, mischievous, stubborn, brave, compassionate, sometimes shy/sometimes outgoing, and unwilling to accept the bullshit.

What is the worst thing your inner critic has ever told you? How did you stop that voice from getting louder?

Oh, lord … let’s see: That I can’t really write, that I’ll never be able to write, that it’s not “literary” enough, that it’s not “genre” enough, original enough, brave enough; that the fight scenes don’t make any sense, the scary parts are funny and the funny parts are dull, the flow is off, the third act falters, the middle sags, the beginning just sits there. Ha.

The hard part is: some of those things have been true at one point or another, and that only means you have to get better and fix that shit, not stop entirely. But the world is always encouraging people, especially people of color, to not write, not tell our stories, not be the brilliant truthtellers we are, so it’s easy to filter those negative self-critiques into a kind of degrading sludge of stagnation. Don’t do that. I’ve had to remind myself, I still constantly remind myself, how important it is to get our stories out there, to tell truths that so often don’t make it through the gridlocked gauntlet of publishing. And when I step back, when I allow myself to trust my voice, the story I’m telling, it lets me take in the useful part of any critique and filter out the bullshit.

Thank you Daniel, for giving us your time and your words!