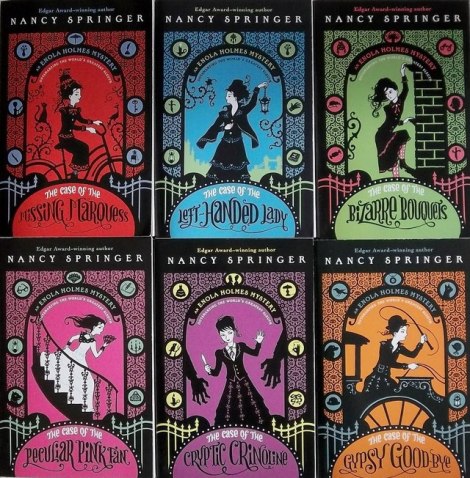 I read The Case of the Missing Marquess, the first in the Enola Holmes series in 2013 and kept meaning to pick up the next books in the series but somehow never managing to do so. Then I arbitrarily decided that January is going to be Girl Detective month here at The Book Wars which afforded me the reason to pick up these books and I did. I read the five remaining Enola books in about a week, not a big task since none of them are more than 200 pages. The following is a review of the series as a whole and while I may (or may not) sprinkle it somewhat liberally with quotes, I’m not going to talk about individual titles but speak about the series as a whole and the overarching themes.

Enola Holmes is the much younger sister of Sherlock and Mycroft Holmes. When her mother abandons her on her 14th birthday and Mycroft decides to send her to a boarding school in order to teach her ‘feminine charms,’ Enola decides to make a run for it. Her mother left her a sizable amount of money hidden here and there around their family estate, and Enola being an intrepid sort, finds it and flees confounding her brothers. She arrives in London and after a few false starts, shows incredible ingenuity and sets up shop as a Perditorian (in case you didn’t know, as I didn’t, that means professional seeker). Of course she is not the asserted Perditiorian, society at the time wouldn’t let a woman own and maintain a business. Indeed, Enola creates a fictional Dr. Ragostin who is titled Perditorian, for herself she takes on the role of secretary and an assumed identity, Miss Meshle. Utilizing her increasing skills of disguise, she changes identities as often as the situations demand and solves cases with alacrity, often leaving her brothers floundering in her wake.

Sherlock and Mycroft are not portrayed as imbeciles who are unable to best a 14 year old but as men in whom the stereotypes about females are so deeply ingrained that they fail to comprehend that their sister would be able to flourish in a city like London without running afoul. Enola often takes advantage of their inability to think outside the box (at least where females are concerned) to escape them. And why does she want to escape them?

Because Mycroft and to a lesser extent, Sherlock are determined to mould her in a way they think all females should be moulded. They cannot comprehend that a female will have the intelligence and the means to apply this intelligence outside of the domestic world in which they are often sequestered. The feminist discourse runs through the entire series and reaches a climax in the ultimate book when Enola finally confronts her feelings about her mother and finds out what has happened to her missing mother. Another prominent theme in the novels are loneliness for Enola’s name spelled backward is Alone and she often feels lonely but the narrative works in an interesting manner to show that for all her loneliness, Enola gains companionship in small but significant ways especially through her changing relationship with her brothers.

The mysteries themselves are all very compelling and often have both Sherlock and Enola working on them. Springer often uses this tactic to show how Sherlock for all his lofty intelligence fails to consider the most obvious clues precisely because he considers them too simple. Enola is able to slip in and out of places before he even realizes that a place is of interest. The writing is superb and I often came across words I was not familiar with until then. I love books that use words in interesting ways.

“All the words I had prepared turned coward and fled my mind like conscripts deserting a battlefield.”

Though the book is ostensibly targeted for middlegrade readers, the prose and the themes of the books will ensure that adults enjoy the titles just as much if not even more. Enola Holmes is an even more intriguing detec-er, Perditorian than her brother. Strongly recommended.