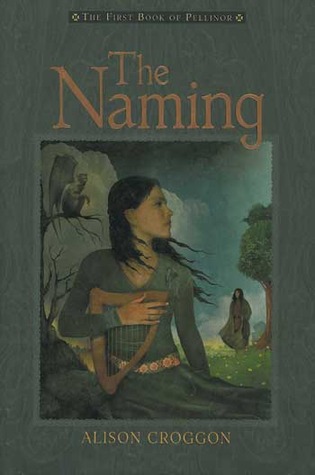 Maerad is a slave in a desperate and unforgiving settlement, taken there as a child when her family is destroyed in war. She doesn’t yet know she has inherited a powerful gift, one that marks her as a member of the noble School of Pellinor and enables her to see the world as no other can. It is only when she is discovered by Cadvan, one of the great Bards of Lirigon, that her true identity and extraordinary destiny unfold. Now, she and her mysterious teacher must embark on a treacherous, uncertain journey through a time and place where the forces of darkness wield an otherworldly terror.

The first book in a projected quartet, Alison Croggon’s epic about Maerad and her remarkable yet dangerous gift is a beautiful, unforgettable tale. Presented as a new translation of an ancient text, The Naming evokes the rich and complex landscape of Annar, a legendary world just waiting to be discovered.

Warning: If you’re not participating in the buddy read and haven’t yet read the books, please note that there may be spoilers in the discussion comments (you know, if I’m not the only person participating…heh…it could happen…) so advance at your own discretion.

If you did sign up to participate in the buddy read or just want to offer your opinion, here is our reading schedule: