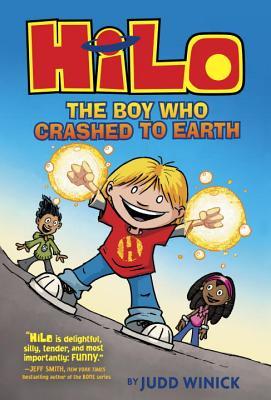 Hilo: The Boy Who Crashed to Earth is a charming graphic novel from the incredibly talented and very versatile Judd Winick, who, to be completely honest with you, I hadn’t heard of until I actually read this book because I’m terrible with pop culture. Anyway, a research into the author’s works shows the breadth of his work; he works in different mediums (comics, animation, TV personality) and he brings a kind of effervescence to his work that his very present in Hilo.

D.J., the only one among his siblings who isn’t gifted in some way, finds a boy in a crater left after a spectacular collision of something (a meteoroid?) with the earth. The boy, Hilo he says his name is, is…a bit weird. Still, he is interesting and things lead to Hilo crashing into his room without anyone being aware of his presence–not much of an impossibility considering D.J. has a large number of siblings and people are always coming in and going out of his house.

Then D.J. finds out that the girl he had been friends with when he was younger, Gina, is back in town but she is so changed that he cannot find the friend he thought he had in her. So things take a slightly melancholic turn but then Gina reveals that underneath the slick city veneer she’s still the friend he had so much fun with. But strange things begin to happen around Hilo and Gina and D.J. find out that Hilo is stranger than they thought (and they think he is plenty strange).

I really enjoyed Hilo. It has humour, diversity, introspective moments, and discourses strongly about friendship and courage. The art is vivid and pleasing to the eye and the pace swift but not so swift that it robs the narrative of the space to grow. This is the first volume in a series I believe and it will appeal to younger children immensely. The comic hero-esque nature of Hilo is definitely going to draw in readers but I feel that D.J.’s feelings of isolation and alienation among his (perceived) gifted siblings will lead readers to empathize with him. I definitely recommend it.