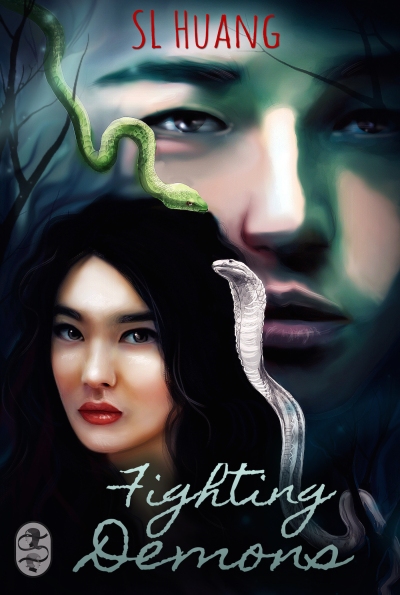 It has been two years since Rosa fled the west, walking out on Xiao Hong and Mei, breaking their family […] Xiao Hong’s mother makes the hard decision to return to her homeland to find Rosa and make their family whole again. Xiao Hong, still angry and hurt by her Auntie Rosa’s secrets and lies, must decide whether or not she will join her mother’s quest.

Meng Jiao has lived in the shadow of his parents for his entire life. The child of a human father and snake demon mother, he has vowed to become the best possible student, scholar, and son he can be–in the hopes of saving his mother from her imprisonment.

Two paths collide in Fighting Demons, as Xiao Hong and Meng Jiao come to terms with their parents, their families, and find their place in the world. — [X]

Well, S. L. Huang does it again. As you may know, I really enjoyed Huang’s short story Hunting Monsters, which was an adaptation of Little Red Riding Hood and Beauty and the Beast. I was excited by the prospect of a sequel story though I didn’t really believe there was a need for a sequel and I certainly didn’t think there was any way it could top Hunting Monsters. But no, Huang proved me wrong there: Fighting Demons is, somewhat impossibly, better than its predecessor and my personal favourite of the two.

While Hunting Monsters used a couple of European fairytales as its backdrop, Fighting Demons uses the Chinese legend of Madame White Snake*. For those who are curious about this legend, a brief Google search will serve you well. Which is not say that Huang neglects to relate the story of the white snake for those of us who didn’t know about it**, but if you are curious about how the tale has evolved over the years (as re-retellings often do)– from an oral tale to a written account in Feng Menglong’s Stories to Caution the World, from a didactic tale about good and evil to a story about love– then, yes, a brief Google/library search may help. Madame White Snake’s story is definitely more central to the plot than Little Red Riding Hood was to Hunting Demons but it is so expertly stitched in with Huang’s own story that the shift between legend and contemporary fiction is unnoticeable. Huang successfully (and, you can tell, respectfully) makes that world of gods and monks and demons her own. This reason alone is worth reading the story IMHO– not that I’m going to stop talking about other positives just yet.

So, the story starts off with Xiao Hong and Meng Jiao in their respective homes, contemplating their respective futures, and the choices that may lead them there or lead them astray. It is all very useful, nicely paced exposition, but just before Meng Jiao begins his journey to rescue his mother and Xiao Hong makes the decision to follow her mother to her homeland, there is a very interesting part that discusses the differences in world-views between Eastern and Western scholars. That part flavours the rest of the story. It heightens the differences between Meng Jiao and Xiao Hong, whose paths naturally cross. It is just so interesting to see them struggle to understand each other’s perspectives on things, and eventually turn that interrogative gaze inward, questioning their own beliefs and wondering if there is any way to find common ground.

While I really enjoyed reading the story from various characters’ POVs– especially Meng Jiao– my favourite character’s head remains to be Xiao Hong. Fighting Demons is very useful in establishing how the events of the previous story changed Xiao Hong, twisting the way she loves and the way she understands love. It is, I feel, an important and realistic part of Xiao Hong’s character arc, so it was good to see it here in this story:

I thought back to Meng Jiao’s words, and the world tilted and shifted. The pronouncements I’d called stupid, insane—if I tried to understand them, where did they take me? He’d spoken of our parents’ crimes as being separate from our love for them—I did not know if he was right, but that did not mean he was wholly wrong.

What I truly appreciate about Xiao Hong in this new instalment though, is the fact that she feels like an outsider in her mother’s homeland. Meng Jiao is feeling a similar sense of discomfort, but his relationship to the idea of home is still unshaken. Whereas, for Xiao Hong, things are different. In the West, her face sets her apart. In this new land, a place where her features aren’t foreign at all, her language, her posture, her outlook, all set her apart. She begins to feel like she doesn’t know where she belongs anymore. I think this struggle is why I love Fighting Demons so much. Typically, we get one POC in a fantasy novel and they are made to carry the heavy burden of all the complicated stories that belong to their skin and their culture. Here, we get to see two characters of the same ethnicity have rather different relationships to their countries, their cultures, and their families. Fighting Demons is such an eloquent and wonderful middle finger to the act of stereotyping and the idea of the single story that writing this review is actually making me want to read it all over again. Definitely recommended. <3

*I don’t know if there is a good translation of this story online (the first time I have missed having access to my university’s libraries), but this is the best I could find …

**Just a few hours before I started reading Fighting Demons, I caught the tail-end (ha) of Cindy Pon’s Twitter chat and she mentioned loving Lady White Snake, which made me look it up and uh, yeah, so many coincidences in one day. (Fun fact: I’d read excerpts from Feng Menglong’s collection for a class but funnily enough, never got to read The Legend of the White Snake.)