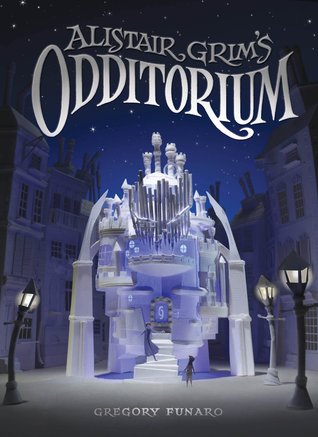 Sequel: Alistair Grim’s Odd Aquaticum to be released in January 2016

I am a sucker for the Middle Grade mystery, it is my not-so-secret love. While Alistair Grim’s Odditorium was not so much in the “mystery” genre it was fittingly odd and mysterious.

This review fits nicely into retellings month – or perhaps it’s more of an adaptation? a spin-off? – because, I imagine that this book, published by Disney Book Group, was inspired by Disney’s Fantasia (released in 1940!). The film is a montage of famous classical music pieces blended with imaginative animation pairing musical pieces with everything from the extinction of the dinosaurs, to dancing hippos, to the iconic Magician’s Apprentice and of course to the devil scene at the end of the film.

Well, like the film, Funaro’s Odditorium is an equally enjoyable experiment that mashes everything from Roman mythology to fairy lore and fantasy, to steampunk, it had hints of science fiction and it was most certainly an adventure. This book was a veritable goulash! And that’s kind of what I loved about it. While at times this odd compilation was a little incomprehensible, I just didn’t care and went along for the ride. The reader simply trips along with Grubb (our adorable chimney sweep hero who also knows nothing) because it was all so refreshing! I had no idea where this imaginative smorgasbord was going to sweep me off to next (though I did trust that our heroes would come out on top, it is Middle Grade after all!).

Let me slow it down a little and give you the basics:

Grubb, a classic “diamond in the rough”, is a big-hearted chimney sweep struggling through life in London under the thumb of a Fagin-esque type character. After getting himself into a spot of trouble he flees and is, literally, lifted out of that life and dropped into life in the service of Alistair Grim in his Odditorium. Alistair Grim tells him that he can stay as long as he doesn’t ask questions, talk about the Odditorium with anyone, or touch anything. Well, of course, he finds himself becomming friends with a troublesome talking pocket watch one moment and the next he is on a manic adventure to save the Odditorium from the evil Prince Nightshade (inspired by that devil scene).

Much like Mickey Mouse in his charmingly honest, good-natured and trouble-plagued ways, Grubb doesn’t necessarily change or grow through the story but instead remains steadfast and true to himself. I liked this. Grubb doesn’t have a big lesson to learn nor does he have to change in order for the story to resolve itself. The only thing that Grubb learns is that, whatever may happen, if he is true to himself (which means being honest and caring to those around him) he’ll come out just fine.

The magic of the Odditorium was fantastic in the true sense of the word. The book draws from the film in that the magic, called Animus magic, incorporates both music and colour in order for it to activate. There are a few explanations of how Animus magics, which come in certain colours, can be blended in order to make new and more powerful forms of Animus magic (red and blue make purple etc…). This is an interesting lesson in primary colours, but really all the reader has to understand is that Animus is magic, it is powerful and Alistair Grim harnesses his through music and some creative machinery.

There are some real, and kind of scary, stakes here. I was surprised when only about 75 pages in we had our first casualties – ok, they aren’t casualties of much significance and it serves a purpose (part of that Animus explanation) but this makes death an actual threat on this adventure. This has it’s positives and it’s negatives. On one hand it has us worried about our heroes and really adds to the tension and the gothic feel of the novel. On the other death can seem like an idle, almost flippant, threat because not only can we trust that our main characters won’t be harmed, but we also know that even if they are Animus magic might be used to bring them back.

Finally, we come to the prose of the novel. It was wonderful. Not only was the pacing quick but the writing was lively and engaging. There isn’t too much time spent dwelling on how everything interconnects but instead it just sweeps Grubb and the readers along on this roller coaster adventure. We aren’t told too much but we aren’t left feeling like information is being withheld simply for plot purposes (you know the old “if only that character had just told this character BLANK then we could have avoided this whole mess).

This book was fantastically imaginative and thoroughly enjoyable. The plot was good and unpredictable, there was action, magic and a good cast of unusual characters and it was all accompanied by wonderful illustrations. I recommend it because it is something different which makes it great for all reader types in the middle-grade age-range (even reluctant! even girls! even boys!).

A big thank you to Gregory Funaro for the signed copy of Alistair Grim’s Odditorium!