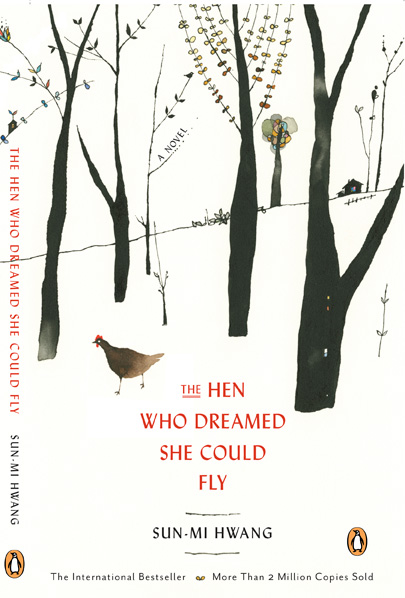 Hwang Sun-mi (born 1963) is a South Korean author and professor who is best known for her fable The Hen Who Dreamed She Could Fly, which has also been made into a successful animated film in South Korea, Leafie, A Hen into the Wild.
Born in 1963, Hwang was unable to attend middle school due to poverty, but thanks to a teacher who gave her a key to a classroom, she could go to the school and read books whenever she wanted. She enrolled in high school by taking a certificate examination and she graduated from the creative writing departments at Seoul Institute of the Arts and Gwangju University, and from graduate school at Chung-Ang University. She lives in Seoul, South Korea.Hwang is an adjunct professor at the Faculty of Literature in the Seoul Institute of the Arts. Hwang’s career as a writer began in 1995, and since then she has published nearly 30 books over various genres. (Source)

The Hen Who Dreamed She Could Fly is a Korean tale translated from its original language by Chi-Young Kim and has sold more than 2 million copies worldwide. I cannot say with any authority but I do believe that it was largely marketed as a novel for adults though it could easily have been marketed as children’s literature as this title, more than any others we have talked about, straddles the genre fences.

The book is about a chicken. And as a Goodreads reviewer remarked, I, too, didn’t think I would ever get this emotionally attached to a fictional chicken. Sprout, when she starts out, has no name and lives the hard life of an egg laying chicken on a poultry farm. All her eggs are taken away and she despairs of ever having an egg that she can nurture long enough that it hatches and yields a chick she can rear and raise. One day she  decides that she will not lay another egg. However, once she stops laying eggs, she becomes useless to the farmer and he pulls her out of the chicken coop and into the yard where she faces further ostracization. Sprout gives herself a name, makes some friends and acquires an egg to lavish attention over.

The prose is simple and easy to read and is accompanied by illustrations by Nomoco which heightens the reading experience. The execution of the story is simple but the message interwoven through the narrative is profound. Sprout’s adventures may be small in scope but there is a universality to her experiences that will resonate with everyone. The simplicity of the story is the reason I recommend this book as a crossover title but the story does pack a punch and will evoke many questions from children about life, death, and nature. The Hen Who Dreamed She Could Fly is extremely uplifting but at the same time, just as extremely sad–like life usually is.

And when you’re done reading the book, there is a Korean movie adaptation that looks super cute that you can hunt down and watch.

5 responses to “Reverse Crossover: The Hen Who Dreamed She Could Fly by Sun-mi Hwang, Kim Chi-Young (Translation), Nomoco (Illustrations)”