As promised, I have another list of books to recommend– this time, largely of Black musicians, poets, and philosophers. Unlike the last list, however, not every book here is non-fiction. I will be sure to mention which ones are not (strictly speaking) non-fiction. Also, there are some books that I have not gotten the chance to read yet– but I’ve put them on this list, so if you’re ever curious or need a place to start from, it’ll be here. :)

So, for the reasons I mentioned in my last post, most of the books I’ve read and the people I’ve read about this month are new and fascinating to me, there are so many I haven’t had the chance to talk about! For that reason, I am going to leave the following links for you guys to explore:

Bayard Rustin: Behind the Scenes of the Civil Rights Movement

Such an aptly named book since I think Bayard Rustin often stays in the background. This book is addressed to middle grade readers, has easy language, is the recipient of the CSK Honor Award for Author, and actually talks about him as a whole person rather than a leader:

The 1963 March on Washington, which he organized, was not supported by everyone with whom he worked, and he was often seen as more of a liability than as an asset to the movement because of his open homosexuality. Rustin consistently triumphed over his objectors and finally a book is available to attest to his contributions.

It’s a pretty important book IMO and it’s great because Rustin’s writing accompanies his biography, so we get a look at how history views him and hoe he viewed himself. A real hero and, despite everything, a staunch believer of non-violence. If you’re curious to read more about Rustin, I’m planning to read Time on Two Crosses: The Collected Writings of Bayard Rustin and I Must Resist: Bayard Rustin’s Life in Letters as soon as I can.

When Marian Sang: The True Recital of Marian Anderson

Ooh! Okay, so this one began with me not knowing who Marian Anderson was and really only caring about Brian Selznick. I know. Totally stupid, because a) THE WHOLE WORLD SHOULD KNOW ABOUT MARIAN ANDERSON who, despite her immense talent, was not allowed to perform at the Metropolitan Opera and b) she performed at the Met Opera eventually, but not before she performed at the Lincoln Memorial to about 75,000 people:

Unsurprisingly, the illustrations are beautiful (though not nearly as vibrant and attractive to a child’s eye, I imagine) and the words are a lovely mix of biography and the songs she famously performed. My favourite bit is actually a spread with a plain background and just the words for Sometimes I Feel Like A Motherless Child. There is an interesting artist’s and author’s note at the end, and a discography, but no further resources. I haven’t found anything that looks promising though, so if you guys find something, once more– I love comments!

Ellington Was Not a Street

Another favourite! I guess Shange and Nelson just work really well together! I really enjoyed Coretta Scott by them, but this one I absolutely loved. This one is not strictly biography/non-fiction, but it has great insight into these historical figures who made music history, starting with Duke Ellington. It mentions nine Black musicians within Shange’s poem-turned-picturebook “Mood Indigo”, and at the end of the book we get a brief biography, illustrated portraits, with mentions of books, music, and musical projects. And by the way, if you want to hear Shange reading her full poem, here you go. Though let me say, you are missing out without Nelson’s beautiful illustrations.

Okay, I know this book leaves out details of Billie Holiday’s life, but it is not a clinical read by any means. It is written in verse, with each poem’s titles referring (I suspect) to the songs that Holiday performed. The language is easy to follow and I honestly think even younger audiences can follow it. However, I think the content points to an older, teen readership. Anyway, it brought me to tears at times and ends on a hopeful note, which I appreciated. That said, it means that it isn’t the story of her whole life and to that end, the writer provides a Works Cited list and a list of recommended books and music. Basically, just what I want from a verse biography.

Martin & Mahalia: His Words, Her Song

There’s this interesting scene in Ava DuVernay’s Selma, when Martin makes a call to a woman and asks her to sing for him. It’s the middle of the night, but she gets out of bed and sings for him anyway. You can tell that she’s infusing his spirit with something beautiful and strong. The caption later tells us the woman is Mahalia Jackson. This book is about MLK and Mahalia and how their stories converge, how they end up supporting each other in a common struggle. The illustrations are especially thoughtful– using separate colours for each person, until the stories get mixed up and then so do the colours. The writing is beautiful, sometimes invoking Martin’s words and gospel music. At the end of the book, they have wonderful artist and author notes, a timeline, and recommended reading and listening. Great stuff for a classroom, and for anyone who wants to learn. :)

Ella Fitzgerald: The Tale of a Vocal Virtuosa

I haven’t read this yet, but I’ve read (and loved) Let It Shine and Martin & Mahalia … and come on, it’s Ella freaking Fitzgerald: 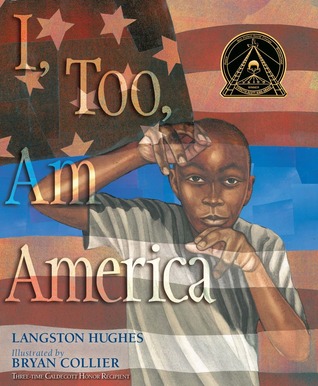 And no, I haven’t read these either, but I’ve read this cover to cover, so I can safely say that yes, Hughes is a poet you have to read (or teach):

The night is beautiful,
So the faces of my people.

The stars are beautiful,
So the eyes of my people.

Gah, I can’t believe how hard it was to get my hands on this. Shouldn’t work by Maya Angelou be easier to acquire?! *ahem* Anyway, like Langston Hughes, this probably can’t be categorized as strictly non-fiction. But at this point, who even cares. Basquiat’s illustrations are bright and can easily appeal to children, but there is also something slightly disconcerting about them– the truth behind these fantastical monsters, you will realize, is what makes you stop and think. Same goes for Maya Angelou’s words. Like all these great musicians, poets, and thinkers, Angelou didn’t just pull a poem out of thin air. She lived it and wrote it with purpose. If you’d like to see hear her perform it, here you go:

And that’s all I have for this month. I’m so sorry I couldn’t stay on top of things! But! These kinds of books and stories should not be confined to a single month, so if you guys would like to recommend some books for Non-Fiction Month/Black History Month, please do so in the comments. :)

4 responses to “Ellington Was Not A Street: On Black Musicians, Poets, and Philosophers”