See, in Indian schools (the ones I attended, at least) we focused only briefly on the Civil Rights Movement*, and knew very little about figures like Martin Luther King Jr., except for the fact that he existed and that he, like Gandhi, was murdered for the goodness and strength he possessed. And even though MLK was often mentioned in the same breath as Gandhi, we conveniently (shamefully) skated past Gandhi’s racist opinions. And so, I’ve taken this month as an opportunity to fill in the gaps of my education. I’m just sorry that I was a) sick for the majority of the month and b) out of town, preventing me from posting regularly. This post, unsurprisingly, is going to be a long one …

Today, I have a list of non-fiction picturebooks about Black women who fought for freedom and dignity. I have (largely) picked picturebooks that have been awarded the Coretta Scott King Book Award which is given to “outstanding African American authors and illustrators of books for children and young adults that demonstrate an appreciation of African American culture and universal human values.”

For each picturebook on my list, I’ve also linked to some supplementary reading materials. Please note that I haven’t read all these extra materials, but I list them because a) I intend to and b) there is no such thing as too much knowledge.

ain’t gonna let nobody turn me around

walkin’ up to freedom land

Thing I love about this one:

There is a one-page biography given by Shange at the end of the picturebook, but unfortunately it is rather condensed and does not provide readers with recommendations for further reading. I guess that is my one complaint. Coretta Scott accomplished so much– from building and managing the Martin Luther King Jr. Centre for Nonviolent Social Change, lobbying for MLK’s birthday to be a national holiday, standing against apartheid in South Africa, opposing the 2003 invasion of Iraq, and regularly speaking out in support of gay rights– and I really think we need a book for kids that mentions all that. Of course, since I haven’t read everything on her, so I may just be missing out on children’s books that do exactly what I’m asking. If anyone has any recommendations, please send them my way. For now, I am just going through all her talks on Youtube and I will be sure to read her book My Life with Martin Luther King.

Moses: When Harriet Tubman Led her People to Freedom

Ugh, I couldn’t get my hands on this one at the library! Harriet Tubman was a phenomenal person and her story was illustrated by Kadir Nelson! I hope you all put this on your TBR List! It’s the winner of the 2007 Coretta Scott King Award for illustration and won the 2007 Caldecott Honor.

What I did get to read is: 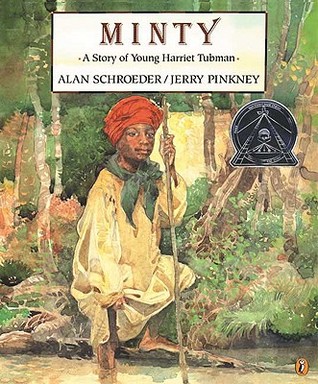 “I know what you’re thinkin’,” Amanda whispered. “I can see it in your eyes. You’re fixin’ to run away, but they’ll catch you– and when they do …” She pointed to a deep scar on her forehead. “Believe me, honey, I’ve tried it and it ain’t worth it. Uh-uh.”

Minty also won the Coretta Scott King Award for Illustration (in 1997) and it’s quite a lovely book about Harriet Tubman’s childhood. I agree that the illustrations are beautiful and absolutely deserving of the award. And yes, there should be books that celebrate all aspects of this brave woman’s life, including her childhood, showing us (however obliquely) the traumas she had to suffer and how it takes great courage to run away from such brutal oppression … only to return and help others run.

That said, I still do think it needs to be rounded off by reading the book above, Moses: When Harriet Tubman Led her People to Freedom. Heroism is quite an understatement where Harriet Tubman was concerned. Even her later life is worth writing epic poetry about.

She had not sought this moment but she was ready for it. When the policeman bent down to ask “Auntie, are you going to move?” all the strength of all the people through all those many years joined in her. She said, “No.”

This picturebook, also a winner of the CSK Award for Illustration and a Caldecott Honor, this book of Rosa Parks is one of my favourites! It starts off with innocuous details of everyday life and then dives right into a historic bus ride. When Rosa refuses to give up her seat on the bus for a white passenger, she sparks a boycott that is felt all over America. The book is one of the few I’ve read that put women at the forefront of this movement, an image that is only emphasized by the gorgeous four-page spread by Collier at the very end of the book, portraying men and women and children marching in peaceful protest. The language is simple, easy to follow, and speaks frankly about racism, careful not to exclude gruesome facts like lynching. (Obviously not in explicit detail.) The book begins with some pretty insightful notes regarding context from both the writer and the illustrator but, once more, does not include a recommended reading section. (Which is why I mention the book Let It Shine below.)

I don’t remember everything about that school year, but there are events and feelings I will never forget. In writing this book, I recall how integration looked to me then, when I was six and limited to my own small world. However, as an adult, I wanted to fill in some of the blanks about what was a serious racial crisis in the American South. I have tried to give you the bigger picture– through my eyes.

I am not even sure what to say about this book. Ruby Bridges was six years old when her parents agreed to send her to a school that would not segregate the races. She had to walk with a host of policeman, past protesting white people (largely women and teenagers), ignoring images of white women holding up black dolls in tiny coffins, and withstanding other cruelties to go to school in 1960s New Orleans. The book is a fantastic one, one that may well move you to tears. It has newspaper articles from the time, photographs, interviews, and even an excerpt from Steinbeck’s Travels with Charley where he recounts visiting the New Orleans and witnessing these events. The language is simple and accessible and can easily be taught/discussed in a classroom. The book also comes with a timeline of the Civil Rights Movement and how Ruby Bridges’ school experiences fit in. I cannot recommend this book enough. Please, just read it. 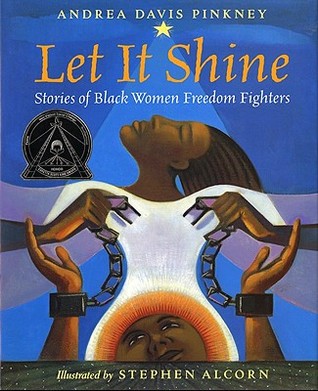 And here we are, the book after which I named the title of this post. It is a series of essays on these impossibly brave women who led their people to freedom and continue to be an inspiration. It includes amazing “sheroes” (as Pinkney says in her introduction) such as Sojourner Truth, Biddy Mason, Ella Josephine Baker, and several more. If you want to know more about Harriet Tubman and Rosa Parks, this is the book you’ve been looking for.

I especially recommend it for the sake of Ida B. Wells, who does not make much of an appearance in children’s literature … probably because she was just too awesome to handle.

Okay, but seriously, most of her writings are graphic and evocative and deal with the grotesque practice of lynching. It was important work that she did. I mean, at one point in America, lynching was such a common sight that white people actually took photographs and used them in postcards!

I tried to get my hands on Ida B. Wells: Let the Truth be Told by Walter Dean Myers (Writer) and Bonnie Christensen (Illustrator)– I mean, Walter Dean Meyers writing about Ida B. Wells!– but it is not an easy book to get a hold of. So, yes, Let it Shine is a great starting point to learn about these incredible women. They even provide reading recommendations, some for historical context, some on the women mentioned in the book.

I find that in all this, LGBTQ women of colour are neglected. There few children’s picturebooks on LGBTQ figures, and fewer still if they are POCs. I, for one, would love to read something on women like Lucy Hicks Anderson and Miss Major and Sylvia Rae Rivera. If anyone has any recommendations for good children’s books (of any medium) on black transwomen, please leave me a comment!

And that’s all I have for now. I have yet another list-type post ready tomorrow– only that one will celebrate heroes of a different nature. Stay tuned. :)

*Which makes sense, since we’re, you know, Indians in an Indian school and apparently the writers of our history books didn’t believe in solidarity. Even so, we focused so little on the achievements of Indian women and only in hindsight see how vehemently history books (and people today) deny that LGBTQIA Indians even existed, let alone played important roles in Indian history. *sigh* I really could go on and on. Maybe this mini-rant will lead to something productive in the coming months …

One response to “Let It Shine: On Black Women Freedom Fighters”