Review of Bob’s Hungry Ghost a picturebook by Genvieve Coté.

Bob wants a dog for his birthday, but instead he gets a ghost … and its name is Fluffy. Unfortunately, Fluffy doesn’t fetch, sit or go for walks. But he does eat everything, and soon all of Bob’s things and even Bob himself end up in Fluffy’s belly. Will Bob find a way to tame his unruly and very hungry ghost? Will Fluffy realize that eating Bob wasn’t a very nice thing to do? All ends well in this sweet and silly look at appreciating what you have. Andeveryone will want a ghost for their birthday after reading this book.

This book, in Genvieve Coté fashion, is just darn cute.

Bob, our hero, was holding out for a dog or a cat for his birthday, but instead he got a Ghost. Now, I know that I would be thrilled with a ghost, but Bob’s heart was set on a more traditional style of pet and so he is sorely disappointed when he revieces Fluffy, the aptly (and ridiculously) named, ghost. Ghosts do not fetch, or sit or play in the way that normal pets would and so Bob quickly tires of Fluffy and stews in his disappointment. Meanwhile, Fluffy gets bored and when ghosts get bored, just like some *ahem* humans *ahem*, they eat!

Slowly Bob starts to realize that things in his house are disappearing and that Fluffy is getting quite massive, but because he hasn’t learned anything about ghosts, he doesn’t put two and two together before it is too late and Fluffy swallows him up too. Trapped inside of Fluffy, Bob makes himself a nice mug of hot chocolate and begins to read about ghosts and quickly learns what ghosts and do and do not like. Most of all, by the end, he learns that just as he was really hoping for a friend for his birthday, Fluffy needs a friend to play with and to keep him company.

The art in this book is whimsical and fun, the mixed media of charcoal, digital and perhaps some watercolour sets the easy-going tone of the story. My favourite lines from the book are right at the beginning, the set up of the story really drew me in, the beat of the sentences was, at times, a little uneven, but by that point I’m already into the story and curious about how on earth Bob and Fluffy will come out at the end. The images, in my mind, overpower the words which as I mentioned sometimes falter in their flow and lyric, but then Genvieve Coté can’t help that because her art is just so lovely and captivating (she has illustrated many a charming book)!

The heart of the story, dealing with disappointment and accepting unlikely friendships is one that can be enjoyed by any child and/or adult at any time of the year. I wouldn’t consider this a “Halloween” story, though having a ghost as a main character might pigeon-hole it as such. The ghost isn’t scary but actually very cute, so I would say it’s an anytime read for young (ages 4) and up. 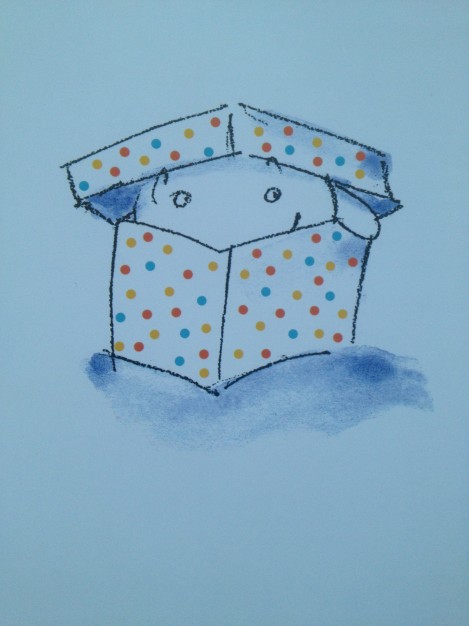 A big thank you to Tundra Books for these lovely review copies!