Yash recently wrote about a new Sherlock Holmes adaptation set in Melbourne, Australia, and shortly after the author herself wrote a guest post on her love for all things Holmesian. Now it’s my turn, because there’s another Sherlock Holmes-related series that I think you should know about. Well, two, actually, but I’ll stick to one for now. Mostly.

Laurie R. King’s Mary Russell series, whose eponymous protagonist begins as Holmes’ apprentice, then his wife and partner in detective work and all sorts of detective-related activities (including spying and preventing murder) is a lot of fun to read – packed with historical nuance, examination of diverse cultural forces, and reflection, in between a lot of action.

That’s not actually the series I’m talking about today, however. Turn the clock a little further back, and we arrive at Carole Nelson Douglas’s Irene Adler mysteries. Irene Adler, the opera singer who is introduced to the world and who exits it via an untimely death in Arthur Conan Doyle’s ‘A Scandal in Bohemia” is the leading character in Douglas’s novels. Dismissed in Watson in Doyle’s story as “an adventuress,” despite plentiful evidence to the contrary, Irene’s rise to prima donna and her life thereafter are re-presented in Douglas’s take on the tale.

One day I looked at the mystery field and realized that all of the post-Doyle Sherlockian novels were written by men. I had loved the stories as a child and thought it was high time for a woman to examine the subject from a female point of view. – Carole Nelson Douglas, “Interview,” at the end of The Adventuress (the second Irene Adler mystery).

The story is quite literally told from a female point of view: narrated by Penelope (Nell) Huxleigh, the orphaned daughter of a country parson, each book in the series is compiled from Nell’s exhaustive diaries, or so we are told at the end of each novel by “Fiona Witherspoon, Ph.D., F.I.A. (Friends of Irene Adler),” who, in proper scholarly fashion, examines the sometimes coinciding, sometimes contradictory evidence offered by two historical sources: the publication of John Watson, M.D., and the diaries of Penelope Huxleigh.

The central relationship in the series is the close friendship between two near-opposites: the daring, unconventional, American-born prima donna Irene Adler, and the less remarkable, decorous, very English former governess Nell Huxleigh. The other relationships in the story – both women’s relationship with Irene’s husband Godfrey Norton, for example, or with Sherlock Holmes, or with the many artists, actresses, spies, and other important personages who populate the narrative – are developed and always evolving, with Nell and Irene’s friendship and alliance, despite their conflicting attitudes towards, well, everything, the firm centre around which everything else revolves. Nell and Irene not only have wildly divergent approaches to cultural norms, social/gender roles, and propriety (to name but a few of the topics on which they differ), their personalities and interests are nearly opposite as well. Irene naturally assumes the spotlight, unless it is her intention to be invisible; Nell is largely unnoticed. Irene is an artist, with great waves of enthusiasm and dejection, and although she can devote hours, even years, to what she loves most (professional opera singing, after all, is not a pursuit one can pick up and drop at leisure), Irene is terribly bored to the point of being incapable of the repetitive, trial-by-elimination, detailed work at which Nell excels. Nell notices cloth and clothing, yet prefers simple, practical garments; Irene dresses much more extravagantly because she loves beauty and because she knows how to use her appearance – in a variety of guises – as a tool or weapon; both attitudes reflect their backgrounds, and both change, discreetly, over the course of the series. Amusingly, although Irene is far bolder and more modern in attitude than Nell, it is Nell who takes a course and finds work as a typewriter girl, which places Nell on the cutting edge of new technology and new types of employment. (Pun intentional.)

The series, and particularly the first book, Good Night, Mr. Holmes, is peppered with reference to the culture and art of the times. Poets, novelists, artists, composers, and advertisements are used as casually as if the reader, too, belongs to the Victorian era. Some of these are famous: Oscar Wilde makes several appearances, and Antonin Dvorak is as wonderful as his music indicates*; others are largely forgotten except by Victorian scholars and scrupulously researching authors. The history of the times, including the comparatively “recent” turmoil in Europe which followed the French Revolution, also affects the characters and setting.

The greater turmoil in the story, however, is neither the wider sweep of history nor the sharp contrast between Nell’s proper upbringing and Irene’s disdain for many aspects of convention, but the many manifestations of injustice and order. Nell, Irene, and Godfrey have all been lied about to their detriment at some or many points in their personal histories. Every significant opposing character in the story lies and deceives. There are personal lies, such as a thief framing an innocent party, and there are societal lies. There is also order imposed through legal and rather more dubious means.

One of the charms is the characters’s agreement to disagree, and the uninterrupted respect for persons of different beliefs. This isn’t to say that the novel is anachronistic – Nell most definitely has the English bias against the French, for instance, and a strong belief in class.** There is still a courtesy, however, that is most welcome.

The series begins with Good Night, Mr. Holmes, followed by The Adventuress; A Soul of Steel; Another Scandal in Bohemia; Chapel Noir; Castle Rouge***; Femme Fatale; and Spider Dance. There may be further stories, but they haven’t been written yet. The first is in some ways the best, as Nell grows the most, and subtly; she remains herself but is more open to less proper influence; in later books Nell exhibits more Victorian English attitudes than she had shown before; as a natural reaction for a sudden expatriate who barely speaks French, is without employment, and who is confronted with more and more outre situations and persons, it makes sense. Nell always continues to develop as a character, of course, and her occasional assessments of her role are quite funny. The humour in the books is subtle, sometimes perceived or instigated by our narrator, and sometimes goes completely over her head.

Why you may like this book: you enjoy well-researched historical novels; you like Sherlock Holmes; you are interested in how Victorian women of the middle classes supported themselves when bereft of family and influence; you like stories of female friendship; you like mysteries; you like Dvorak or Wilde (small roles, but so much fun to “meet” them!); you like detective stories; you like clothes. Oh, also [spoiler alert] the second book in the series has an awesome duel – with rapiers! I love it that the kind of sword is specified, that training attitudes are contrasted, and that the weapons are rapiers, not smallswords. (Just personal preference. Smallswords are awesome, too.)

Why you may not like this book: You cannot countenance any small alterations to the Doyle canon; you have a profound respect for the European monarchy (*coughevenfictionalmonarchscough*); you don’t like historical novels.

* Antonin Dvorjak is to a small extent (he isn’t a major character and appears only a few times) the Uncle Iroh of Good Night, Mr. Holmes. I always have to listen to his Symphony No. 9 after reading – although he actually hadn’t written it yet when the story takes place.

** Not a spoiler: Nell does, of course, change over the course of the series – even over the course of one book. She stays living in Saffron Hill, for instance, the Italian district of London, long after she could move elsewhere, and from finding the Italian street vendors’s cries irritating eventually welcomes them; she even learn a few Italian phrases herself – a small feat today, but a significant step for a Victorian gentlewoman.

*** Chapel Noir and Castle Rouge form the Ripper duology. Just saying – gore. Femme Fatale and Spider Dance are set in America, while all the other stories take place in Europe. 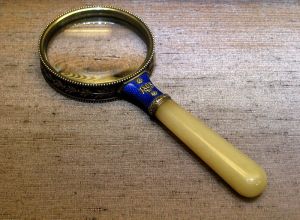 In case you were wondering, yes, I am working on a chronology of the characters: both what they were doing in which year, and how old they were at the time. It is, however, very full of spoilers so please do not read it if you haven’t read the series! and so far incomplete. I’m currently re-reading Good Night, Mr. Holmes for the second time in about as many weeks, as I didn’t think to track the chronology the first time around. Page references below are taken from the first Tor edition, 1990 (see the grey cover near the beginning of this post). I’ll update the chronology either below or in the comments.

**** In Good Night, Mr. Holmes, this young man is named Emerson. When he reappears in later tales, he is named Quentin. [Much more dashing, in my opinion.] This is one of the few small continuity errors in the series, and for all I know were corrected in later printings or editions by other publishing houses. Another small error is that in Spider Dance, Nell does not know Quentin’s age, whereas she knew he was 24 the first time they met. [Edit November 17, 2014 – my mistake: in A Soul of Steel, the man in question states that although his first name is Emerson, he prefers and goes by his middle name of Quentin among his close friends and family.]

***** Nell’s age at this point and when she met Quentin is unknown, although working backwards: Nell was 24 in 1881, therefore she was 21 in 1878. We do not know how old Nell was when she began working for the Turnpennys, nor how many years she was governess for them. By 1879 the Turnpenny girls had reached an age where they were beginning to not need a governess (13), perhaps 16-18 years old; when Quentin and Nell meet he remarks that she looks like one of her charges (13), so she was clearly not much older than them or else young-looking (fitting for an innocent like Nell). From scattered references throughout the series it is clear that Nell did not have a problem with keeping order when she was a governess; she wielded authority and commanded respect as well as affection, which to me suggests a difference in age between Nell and the girls, however small (two to four years?), as well as saying good things about Nell’s character and that of her charges. For this reason I imagine that Nell was no younger than eighteen and no older than twenty-one (more likely twenty) when she met Quentin.

Have you read Good Night, Mr. Holmes? What do you think about Irene and Nell’s friendship, and their sometimes-complicated relationships with other people?