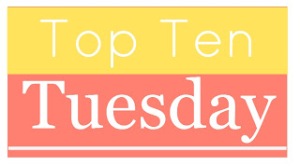 This is hard, I hardly think about rereading, there’s no time for rereading!

BONUS! Interpreter of Maladies by Jhumpa Lahiri. I read this in high school and did not have a great opinion on it. I wonder if it will reveal something new to me if I read it now, seven years later.

Unlike Steph, I am eternally rereading. Books on my TBRR (to be reread) list do stay there for long.

6 responses to “Top Ten Tuesday: Books I Want to Reread”