[I couldn’t resist! Two of my favourite writers- and it fit in with this month’s theme!] 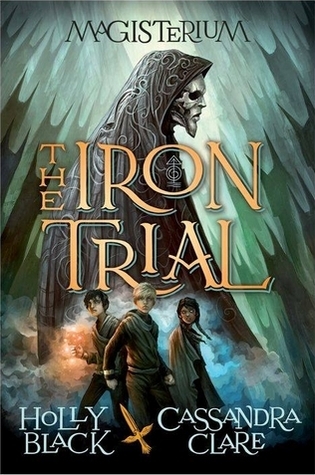 The summary provided on Goodreads for Magisterium [Book 1]: “The Iron Trial” is … not great, so I have done everyone a favour by editing the summary to just what you need to know:

A dazzling and magical middle-grade collaboration centering on the students of the Magisterium, an academy for those with a propensity toward magic. In this first book, a new student comes to the Magisterium against his will …

I was so looking forward to this book. I was informed that it was a very trope-y, paint-by-numbers kind of fantasy boarding school story, but I’ve always believed that the magic is in the details. When you write a fantasy boarding school story whether it’s Rowling’s Harry Potter or Bray’s Gemma Doyle, it will always have certain tropes and stereotypes. What matters to me is how these tropes and stereotypes are navigated or rewritten- and The Iron Trial does these things in an intelligent manner.

Yes. That’s the one who doesn’t want to join the magic school. The protagonist. And, guess what? He’s not the guy who is front and centre on the cover- which is actually my favourite part of the cover. He is snarky. He is smart but not hard-working. He isn’t athletic (no, not even in a I-Suck-At-Rugby-But-I-Can-Play-Quidditch way) and a childhood injury has left him with a painful limp in his walk. Call Hunt should have been, by all accounts, a sidekick character.

At first, that was what I loved most about Call, he was a character that was resisting becoming a trope. Eventually, what I really did love about him was how real and complex he was. He loves and respects his Dad (who hates magic), but Call also loves magic and his talent for it. He loves magic, but he doesn’t want to be taught. He wants to love and trust his friends, but having been bullied all his school years (because of his leg), he doesn’t know how to trust them. He’s funny and charming, but if he is sad or angry you’ll know for sure. Also, Black and Clare did a good job IMHO, with Call and his disability. He is first and foremost treated as a person but by the same token, neither they do not forget the disability and the unique challenges it poses, nor do they try and “fix” it. Call is set to be one of my favourite (male) characters.

Magisterium is a dazzling (literally!) underground school with labyrinthine tunnels and water systems that students learn to navigate slowly. The way the school works is that there are Masters who choose their apprentices and train them through the five years (a book for each year is to be expected).

As with all fantasy boarding school stories, the previous generations mucked things up a little (or a lot) for the new kids, and it’s starting to affect them. Obviously, Call (and the readers) do not know a lot of the details, but what I loved about this particular aspect is that Call walked into the school not trusting everyone he met, even the Master who chose him. A wary kid is a kid who is the least likely to die … right?

Oh, gosh, I so loved the way that magic worked for this one. It’s based on the elements. I don’t want to complicate this review by going into details but 5 is the magic number for this series. What is most interesting to me is the way in which the magic is limited. The possibilities of magic, though theoretically endless, can affect the magic-maker in a adverse ways. And that’s all you’ll get from me here.

The Trio (and Company)

The established trio for this series consists of Call, Aaron, and Tamara. It’s a thing with this novel to introduce characters who are stereotypes- only to reveal them to be actual, three dimensional characters. Aaron, the blonde kid who is the focus of the cover and was basically built in a secret lab to be a Hero, allows for an interesting take on the “Chosen One”. (Also, look forward to meeting Jasper!) Tamara, who was raised to be the hard-working swot, encourages conversation on agency and on making one’s own path. Also, Tamara is an American character who is not white and the nuances between race and ethnicity are well-written. (Though there is room for more exploration in further books, I guess). There was a scene I loved where they got to pick their favourite foods and I was so worried that a dayereh would be playing in the background as Tamara picked kebab (because that’s how some people think race works), but she picked sushi and that just made me grin.

… obviously, it isn’t actually like that. The Iron Trial is a meticulously laid out fantasy world that explores the more challenging dimensions of certain fantasy/boarding school tropes and turns familiar stereotypes on their head. The world is accompanied by engaging writing, diverse characters, enchanting hijinks, and entertaining plot-twists. It is a back-to-school, September must-read.

[NOTE: The illustrations are from the book and are by Scott Fischer. Also, thank you to Laura for the distractions and the pictures.]

16 responses to “The Iron Trial by Holly Black and Cassandra Clare: A Review”