A lot of people think ABOVE THE DREAMLESS DEAD was my idea–a natural assumption as it’s a  pretty specifically focused book. It wasn’t my idea though–Calista Brill at First Second called me and asked me to put together a book of comics adapting World War I poetry. She got the idea from her husband. I thought it was a pretty bad idea. But then I started reading the poetry. (The first collection I read was Men Who Walk Away, followed by the Penguin Book of World War I Poetry.)

I’d like to think that after reading a book of poems by WW I soldiers such as Sassoon, Owen, and Rosenberg, any thinking, feeling person would jump at the chance to bring the work to more readers. I think all the cartoonists in the book felt the same way. These days not man of us in North America, United Kingdom, and Ireland have direct experience with war. But it’s important to bear witness to those who did, and who still do. 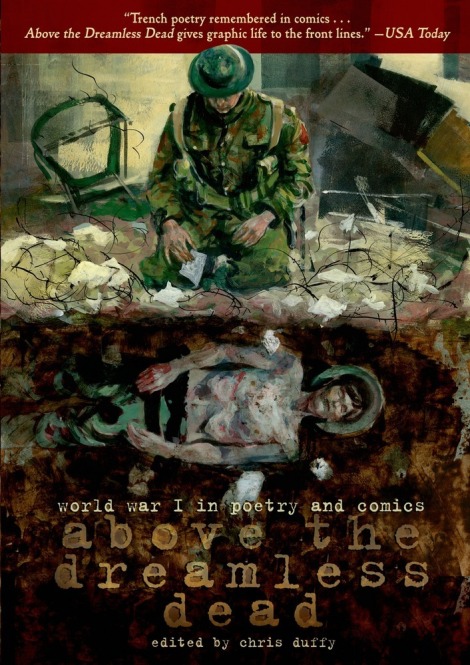 I don’t know much about the wars except what I have learnt about it from classes I had to attend in high school and the fiction which dealt with them. Obviously, I know how they started and how they ended but war narratives strike me as bleak reiterations of human folly.

Above the Dreamless Dead brings together living artists and dead poets to create a graphic manifestation of the poetry written by those who had firsthand experience with war. The result is not easy to read, not in the sense that the volume is badly done but because the subject under discussion is so difficult. These poets are either on the brink or have already realized the pointless nature of war. Sure, they were fighting for something that they believed in at the beginning but when they are surrounded by the countless dead they used to count among their brothers and friends, this belief is difficult to hang on to.

Some of the poems are accompanied by images that start and explicit; faces with mouths open in a silent scream, eyes filled with terror and so many other ways of people hurting. There are times when the words of the poetry are overwhelmed by the images surrounding them. But I think on the whole the volume manages to portray glimpses of what the world war one was really like.

This is an important volume; not just for its literary merit but also for the warning in the poetry. The warning that we, looking at the countries at war, still have not heeded. War is never a good thing. Chris Duffy’s collection of poetry and art gives this poignant and beautiful message effectively.