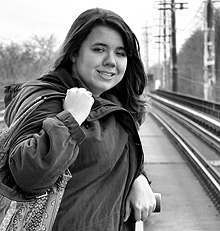 Kody Keplinger was born and raised in rural western Kentucky. She always enjoyed writing and began working on “novels” when she was eleven. She wrote her first published work, THE DUFF, during her senior year of high school. Since then, Kody has written two other novels, SHUT OUT and A MIDSUMMER’S NIGHTMARE.

Kodya writes for YA Highway, a blog devoted to the young adult publishing industry. She is also a featured writer for Poptimal.com, a popular pop culture blog, where she reviews TV shows and movies. (source)

You wrote your first novel when you were a senior in high school. The D.U.F.F., according to your blog, came out of your own experiences as a teenager. Most of the literature targeted at young adults is produced by adults. Jacqueline Rose, a scholar, has theorized that there is no such thing as “children’s literature.” Instead, she argues, the literature produced by adults is a way for them to hold on to their idea of an innocent childhood. As someone who was a published author in her teens, how would you react to Rose’s comments? Do you think your representation of adolescence has more authenticity?

First, I want to clarify. I think it would be misleading to say THE DUFF came from personal experience. Rather, the title and concept were inspired by a conversation I had in high school, and many of the elements – the way the characters talked, the school setting, etc, came from what I was witnessing and believed to be true of my own high school at the time. In no way, though, is the book based on my personal experience. It’s not autobiographical.

And no disrespect to miss Rose, but I have to disagree with her statement. Perhaps some children’s book authors write to recapture their perceptions of childhood, but that’s not my experience nor is it the experience of many people I know. I teach a children’s book writing class as well, and I definitely don’t see this being a key motivation for most of my students. They all have very different motivations – for some it’s to write books their children could enjoy, for some it’s to write stories that will speak to the kind of children they were, stories that might not be easily accessible right now, and for some – myself included – they just enjoy writing about kids and teens. Those are the stories they (and I) enjoy, and therefore the stories we write.

As to your question about the accuracy of my representation . . . it’s hard to say. In some ways, maybe, I was more on target with teens at the time, but will that speak to teens in five or ten or fifteen years? If anything, I actually think I’m more accurate now, having had some time away from those teen years to reflect and see things I might have missed as I was living it. I think I have a better understanding of my high school experience now than I did at the time. That sounds strange, but it’s true. Friends I believed were good at the time I now see were not. Boys I once had a crush on I now see weren’t at all worth my time. Teachers I thought hated me I can now admit were just trying to push me. That time and space has proven useful to me – not just as a person, but in my writing.

Most of your novels deal primarily with romance. How do you approach romance in your novels? Are there any qualities or complexities that you intentionally imbue your portrayals of romance with? And why do you think you’re so intrigued by romance?

It’s interesting – I never saw myself as a romance writer until I was told I wrote romantic comedies. In my head, I was just writing about these girls I found interesting and part of their stories just happened to be the boys that entered their lives. Which is not to say I dislike romance – by all means, I love it.

When writing a romantic plot, I am careful. Now more than I used to be, probably. I like stories in which the female lead still has a life and a power within her romance. Too often women are portrayed as being obsessed with men, as romance being the ONLY thing they think about. This has never been true for me, and therefore, it’s not really true of my characters. Romances happen, but they still have other interests, other friends, and their own, individual lives.

As for what I find intriguing about romance . . . I think, in young adult literature, it’s the newness of it all. There are so many firsts. So many new, intense emotions. Everything seems to have such higher stakes. It’s kind of thrilling.

The D.U.F.F. broke several boundaries in its frank portrayal and discourse of adolescent sexuality. Did you have any problems or suggestion to pare down the sex in your novel when it first got picked up to be published?

No, I actually. I expected to be asked to cut back, but I was very lucky that my publisher, Little Brown, and my editor there were totally behind me. They knew when buying the book what it was about. They knew my vision. And they supported that vision.

In the same vein, how important do you think it is to discuss and portray adolescent sexuality without making it into something perverted or taboo? For example, not very many years ago, the only YA novels that discussed adolescent sexuality were those of a distinctly cautionary nature where the protagonist invariably ended up pregnant and alone.

I think it’s so important to have open, honest discussions of sex and sexuality, and I think books are a great gateway into those conversations. I consider myself to be sex positive, which means that I think sex shouldn’t be treated as a negative, awful, dangerous thing. Instead, I think it should be discussed honestly – the risks, but also the benefits. And how to deal with sex in a mature, responsible way. Personally, I think keeping it a secret or making it taboo doesn’t prevent sex from happening, it just keeps people in the dark about how to take care of themselves.

Books are a great way to let people experience things and learn about them without doing them first hand. I think we’re vastly underestimating teenagers if we assume reading about sex is going to make them all go out and do it. Instead, I think it’s more likely to lead to them thinking about and discussing these issues.

Our theme for the month of February is love. What are some of your favourite literary romances?

Oh, I know it’s a cliché, but I do love PRIDE & PREJUDICE. Also Beatrice and Benedick from MUCH ADO ABOUT NOTHING. What can I say? I guess I have a soft sport for love-hate stories.

Can you tell us something about your next project? What’s inspiring you these days?

My next project is a middle grade novel, actually! A big departure, but a good one, I hope. It’s about one girl who is best friends with the three boys next door and how one summer, after the boys’ family starts to fall apart, their friendship begins to change forever.  It’s called THE SWIFT BOYS & ME and it’ll be out at the end of May!