We are delighted to be the 13th stop on George O’Connor’s “blog crawl,” a blog tour organized by Gina over at First Second books. Here’s the list of blogs George has been at and will be on in case you want to follow him on his adventurous ride through the blogosphere.

Before we move on to the George’s post, here’s his official biography: 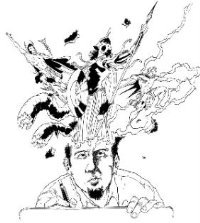 George O’Connor is the author of several picture books, including the New York Times bestseller Kapow!, Kersplash, and Sally and the Some-thing. JOURNEY INTO MOHAWK COUNTRY was his first graphic novel, a long-held dream that weaves together his passion for history and ongoing research into Native American life. He lives in Brooklyn, New York. (source)

Without further ado, I present to you George O’Connor!

Greetings and salutations, Book Warmongers. Today, on this exciting installment of The Book Wars I will be your guest blogger. My name is George O’Connor, and I’m making a blogcrawl of some of the best and brightest book blogs (ah, alliteration) in celebration of the release of my new book, Aphrodite: Goddess of Love. Aphrodite is the sixth volume of Olympians, my ongoing graphic novel series which retells classic Greek Myth, one deity at a time.

The Book Warriors who run this site have graciously (foolishly) allowed me to choose my own topic to write about in my guest post. If you’ve read along with me on my stops at other blogs during this blogcrawl, you’ll know that I attempt to make at least a tenuous connection between the hosting blog’s title and/or statement of purpose and the topic of my blog post. In this case, even though I’m promoting a book about the goddess of love, today, as befits this site, I’ll be talking about a war, arguably the most famous literary war in history.

In the early(ish) part of the twenty-first century, the hellish conflict known as the Book Wars erupted out of an hitherto peaceful corner of the interwebs. The roots of the conflict are lost to the mists of time, but what is known is that the major architects of this deadly conflagration were the dread General Vash, the Supreme Master Stephanie, the Exclamatory Nafiza! and the mysterious entity known only as… Janet, alternately described as some sort of childlike drawing or a four-eyed befanged purple tree monster, whichever you find to be the most horrendous. Motivated by a desire to spread awareness of children’s literature, these three fearsome warriors spread out over the globe, with books as their weapons, resulting in an unprecedented amount of broken spines, torn jackets, nasty paper cuts and some slight foxing around the edges. The Book Wars will undoubtedly go down in history as one of the most destructive and nightmarish of conflicts… no, no wait.

I’m being silly here. See what happens when you let me choose my own topic to write about?

The most famous literary war in history I’m really talking about is not the Book Wars but is in fact the Trojan War. You know, with the Achilles and the Hektor and the Helen and the big wooden horse and all those sailors asking Odysseus “are we home yet?”—that war. My book Aphrodite: Goddess of Love features the beginnings of that conflict—not in political machinations, not in international tensions, but rather in a beauty contest.

I’ve written elsewhere, and extensively about how dubious and out of character the whole beauty contest between Hera, Aphrodite and Athena as the start of the Trojan War is, so I won’t delve too deeply into it here. I just want to say that in my book, I’ve subtly recast the whole Judgment of Paris as more of a power struggle between three extraordinarily formidable goddesses and less of a silly competition to get a golden apple. Do any of those goddesses really care about who’s the prettiest? Athena wears the Aegis— it’s made of goat skin, giant scales and actual living snakes—does she seem like she’s the sort who would be all that interested in being thought the fairest of them all? And the prize is a golden apple—Hera owns the garden of the Hesperides. She has a whole freaking tree of golden apples, why does she want one more? The fact is that the whole thing is a set up by that wily Zeus to set his most powerful rivals against each other, while simultaneously dealing with another problem of his.

The ancient Greeks viewed the Trojan War as marking the end of the Heroic Age, a great culling of the heroes and demigods who populated their myths and stories. A remarkable number of those demigods traced their lineage back to Zeus himself (the designer for Olympians refers to the Family Tree included in each volume as the ‘Zeus-keep-it-in-your-skirt tree’) and Zeus, realizing that through his many indiscretions he had overpopulated the world with superhuman maniacs and potential future headaches, decided to do something about it. By setting the judge of these goddesses as a young prince of Troy named Paris, Zeus guarantees no matter who wins, that two other incredibly powerful goddesses will be offended, and sides will be drawn. And that is how the stage set in Aphrodite: Goddess of Love, for the most famous literary war in history (at least so far).

First Second Books are giving away a copy of George’s book, Aphrodite, Goddess of Love, to one lucky blogger.

To enter the giveaway, simply leave a comment and your email address and we’ll contact you should you win. To keep things interesting, tell us what is your favourite thing about Valentine’s Day is. Unfortunately, the giveaway is open only to residents of Canada and United States. Winner will be chosen through random.org. And the giveaway will be open till next Thursday. Good luck!