I was a little stuck for a blog topic this morning. I kept thinking about all the books that had my toes curled, shivers sent up my spine or made my eyes squint (the harder to see the scary words…) and I kept coming up with books that aren’t exactly horror. So, I ended up writing a meditation on what horror truly is in children’s books.

Most readers of horror fiction are expecting to be exposed to at least the possibility of fear and horror. So why do they do it to themselves? Well, why do people read any kind of literature? Enjoyment. It’s an exercise for the imagination – the mist that has swathed Vancouver recently has made this month’s theme all the more effective for me as I see shapes in it, hear it collecting itself, and picture it leeching the life out of us commuters, ever so slowly. Horror fiction couches its characteristic exploration of human life in particular forms of imagery which are dark and terrible and unnatural, and which are associated with fear. In certain contexts, people actually like being scared. Perhaps it has something to do with the primal nature of fear. As Lovecraft put it:

And what is more unknown than death and the unnatural? As death is the inevitable end of human life, and as death remains one of the most profound of unknowns, the imagery of death which horror fiction adopts — ghosts, vampires, the living dead, unnatural killers — has unusual potency.

Many books designated as horror, from the classic prometheus story Mary Shelley’s Frankenstein to Stevenson’s Dr. Jekyl and Mr. Hyde and Stoker’s Dracula aren’t really all that frightening to me, but they are about the creation of the uncanny, the terrible and unnatural – they are the birthplace of ideas that stretch beyond the grave.

Horror in children’s fiction then, like in the stories of John Bellairs hearkens back to these classics and invokes ghosts and witches, but for me The House With a Clock in It’s Walls for example has, perhaps, moments of tension, but isn’t really frightening. I mean, I love the book but I’m sorry Bellairs, Lewis Barnavelt’s tale is just not frightening. Even the good old Halloween Tree is more history lesson and sad story than frightening and horrific. 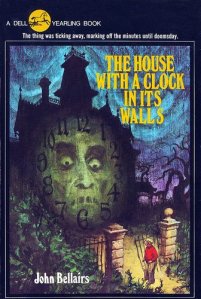 Actually, I would say that many wonderful novels for children and young adults have elements of horror, from the books of Garth Nix, Neal Gaiman, Diana Wynne Jones… I mean even in Redwall I remember being pretty frightened and certainly in Harry Potter there are moments of true horror – and there are ghosts!! So what is horror then? Does it have to have a ghost in it for it to be horror? What is it in a children’s book that invokes that feeling of horror?

In the Goosebumps that were truly scary, or left me with that eerie stomach sinking feeling that a good horror should produce, were the ones with uncertainty at the end. Resolved just enough – in Say Cheese and Die for instance, where there is a haunted camera that takes pictures of people’s fate and eventually sucks people into it, the end has the protagonist figure everything out and save the day… only to have his picture taken on the very last page. What will happen to him? There are a few other Goosebumps that did this and I think these ones were truly successful. They introduce the dangerous artefact and then don’t solve the issue, that camera is still out there and our protagonist is probably stuck inside of it… 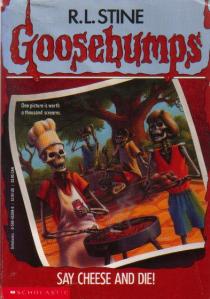 So, am I saying that the successful horror stories have to end with death, or something like it?

Well, for me, death as an image is about more than simply the end of life. Metaphorically, it encompasses loss — bereavement, uncertainty, alienation, insecurity, embarrassment, loss of belief or self-image, change … in fact, anything that represents the encroachment of the Other or a concept of reality that isn’t ours and which we can’t control. I think that’s it, powerlessness — loss of control — is a central theme of the horror story.

Who hasn’t felt powerless? Certainly children, who face a world that is mysterious, alien, sometimes brutal and often domineering, a world of adults, a world that creates a strong need for love and community. A good example of a horror that plays on this idea is Gaiman’s Coraline, which I thought was truly frightening, where we have the button-eyed Other-Mother. Coraline is constantly ‘powerless’ in her everyday life, no one can say her name right, no one has time for her, she is forced to eat what her parents cook for her, she has been moved out into the middle of nowhere, she will have to wear a uniform at her new school etc…etc… And then the other-mother comes and she has to fight for, not only her life but her parents’ and she has to discover the solution to the problem and take back her power. The adventure is frightening and eerie… and the end has an element of the unresolved, but generally, there is satisfaction and Coraline is once again safe at home. 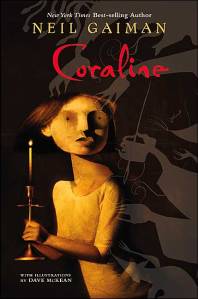 So, horror stories can be both unsettling and reassuring. They unsettle by suggesting that the safe, comfortable lives we generally lead exist on the edge of a precarious drop into darkness. Maybe things aren’t what they seem. Maybe we’re not in control. But in the end, these ideas are expressed through fiction — fiction from which we can more-or-less safely emerge to resume our ordinary, safe lives. The terrors are there, but having indulged them, we have, for a while, diminished their power over us. We feel reassured. I’m not so badly off, we say.

P.S. I read this and found the Lovecraft quote here:

3 responses to “Oh the horror!”